BotBots Series 4 has given up on including art of the mall where the tribes all live, so we don't know where Fancy Flutter's cookie store would be located, but at least we know he's a member of the Sugar Shocks, one of the groups still hanging around from Series 1. 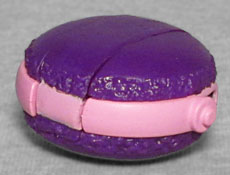 This is a macaron, a French sandwich cookie noted for its light, airy consistency and never tasting as good as you think they're going to. That's not to be confused with a macaroon, which is a wad of coconut and meringue dolloped out and toasted. One takes care and attention, the other can be heaved at a cookie sheet from across the room. Macarons come in many different colors and flavors, so the fact that this one is purple with a light pink icing is probably not outside the realm of possibility.

Another thing BotBots Series 4 has given up on? Instructions. Apparently they're now trusting us to be able to figure it out on our own. Fair enough, we're going to say... unfold the bar on the top, and twist the wings out of the filling on the sides?

Everybot knows Fancy Flutter throws the fanciest mischief parties, and everybot knows you won't be invited back if you don't follow his 4 Golden Rules of Mischief Party Etiquette:
1. Be sure to RSVP
2. Always show up to the mischief on time 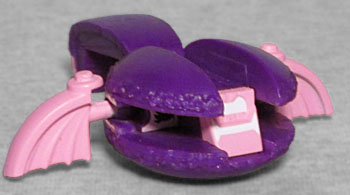 3. Arrive with your gears well-greased, and with a clean faceplate
4. Never hog the mischief. Greedy bots will be escorted out and forced to behave

Fancy Flutter appears to be a dragon, maybe? The wings are more leathery than feathery, nor are they the butterfly wings his name might have led you to expect. The face is as pink as the wings, with a single "pair of goggles" eye and a line stretching all the way across the head for a mouth. There's some tech detailing along the back and under the tail, though the balljoint that allows you to turn the tail into place is stiff, and feels like it'll rip if you're not careful.

The third thing BotBots Series 4 has given up is original art of all the characters, with just product photos on their website - amusingly, Fancy Flutter's stock art shows him upside down. Top-notch work! Both versions of the Gumball Machine Surprise Unboxing include a Fancy Flutter. Maybe in case one does break. 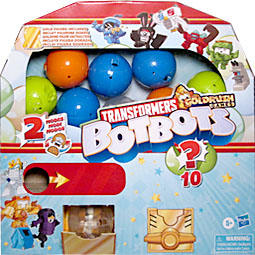 Next out of the slot is a clear gacha, so it won't be as surprising, but let's look anyway!