BotBots Series 4 has given up on including art of the mall where the tribes all live, so we don't know where Smore N'More would be hanging out (what kind of shop sells s'mores at all? Isn't that something you just make at home?), but we can at least tell you she's a member of the Sugar Shocks. We promise not every bot in this set will be.

S'mores have been around for about a century, with the first 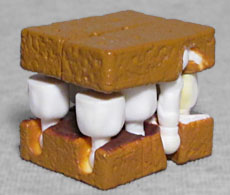 published recipe (documenting a treat that had already been popular at summer camps) appearing in the 1920s: you heat up a marshmallow until it's gooey, then put it and a chunk of chocolate bar between two pieces of graham cracker. It takes about 10 minutes to make one over a camp fire, or about 30 seconds in the microwave. The graham crackers used to make this s'more are the thickest ever seen, nearly as big as the marshmallows! They're sculpted with an appropriate texture, and the design even makes the marshmallows look like they're melting!

BotBots Series 4 has no instructions, leaving you to decipher things on your own. The best we can guess is that you split the top cracker, then lower the marshmallows on the head and feet. It's not the greatest plan, but it's what we have right now.

Smore N' More can't help it, she just always wants some more, and more. ESPECIALLY chocolate. And marshmallows! They're just so ooey-gooey good she eats them by the handful. Other bots have to hide their sugar stash so she doesn't eat it all. 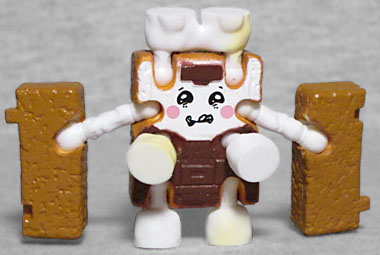 But somehow, she always finds it! And instantly devours it. She's insatiable.

The figure seems to be slightly misassembled: the (conjoined) marshmallows that end up on top of her head appear to be molded with little bumps representing toes, while the (separate) ones under her butt have no such thing. The face is white, like marshmallow, while the rest of the body is chocolate brown. The outer biscuit layer just hangs off her sides, with no good indication of what they're supposed to be. And what are the things on the head? Is she supposed to be a bunny?

Again, this BotBot is available in both Gumball Machine Surprise Unboxing sets, and both in clear capsules. 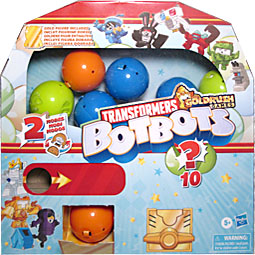 Onto the next page, where we shall examine another orange ball.