Series 4 of the BotBots may have ditched a lot of things - pictures of the mall, pictures of the bots, instructions - but they're keeping alive the tradition of repainting older toys as new ones. But at least we're getting new factions out of it, right? That's how Game Older can be a member of the Retro Replays! 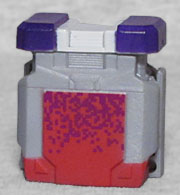 This is the same mold as Skillz Punk, making it a nice, old-fashioned game cartridge. It's light gray with some purple at teh top, and the label on the front is a red-and-purple static pattern. This wasn't a very exciting figure the first time it came out, and it still isn't now. At least we already know how it's supposed to transform.

BotBots are intentionally simple to convert, so all you need to do is raise the head, pull the arms out to the side, and flip down the legs. The arms are much easier to move than before, and the legs lock in place so he won't fall over. 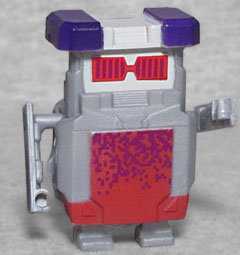 to help his memory. They'll blow the dust out of him, shake him around like a maraca - even put him in the freezer! With that kind of treatment, it's no wonder he can't remember anything!

Okay, blowing into the cartridge is something we all knew to do (with absolutely no instruction, making it a prime example of parallel development), but shaking it? Freezing it? Are those things people actually did? To what system? Game Older isn't a particularly interesting robot, either, little more than a block with limbs - nothing clever happens when changing the cart into a body. His facial features are even a direct copy of Skillz Punk, just in different colors.

In addition to the Gumball Machine Surprise Unboxing, Game Older is also available blind-packed, as #16. 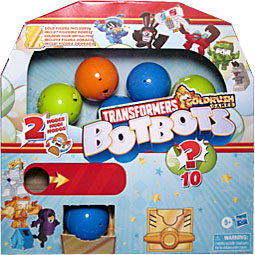 Let's keep going, with one of the capsules in "Series 4" blue.