BotBots Series 4 has given up on including art of the mall where the tribes all live, so we don't know where Frostfetti Frostyface's store would be located, but at least we know she's a member of the Sugar Shocks, one of the groups still hanging around from Series 1. 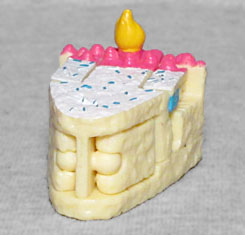 Actually, would a "store" really be selling birthday cake by the slice? It's more likely this would come from a restaurant, where unwilling employees are forced to sing "Happy Birthday" to equally unwilling customers. It's a substantial slice of yellow cake, with white and pink icing and blue sprinkles, plus a short candle right near the edge. The texture of the cake is appetizing, with the sides looking fluffy rather than perfectly straight. There should be more of a point in the front, but maybe someone already took a bite?

Another thing BotBots Series 4 has given up on? Instructions. Apparently they're now trusting us to be able to figure it out on our own. And in this case, it's not too hard at all: swing the legs out and around, fold the arms forward, lift the flap over the face, and tip the candle onto the top of the head.

It seems like everything comes easy piecey to Frostfetti 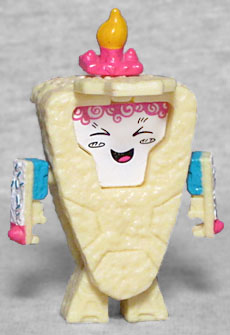 Frostyface! Like being happy, being sweet, being loud, being colorful, and being EXCITED! She faces the toughest challenges with a giggle and celebrates even the smallest of victories with lots and lots of confetti! YAY! Other bots may complain about things being too hard, but for Frostfetti Frostyface, everything is a piece of cake!

"Frostfetti Frostyface" feels like an over-engineered name, doesn't it? Like they were trying to play off of Boaty McBoatface, or like the two names were pitched separately and simply mashed together. She does have a wondrously joyful expression on her face, and colorful whirls of pink "hair" on her forehead. The cakey texture continues here, on what was once the bottom of the cake. There's some blue on her upper arms, and pink on the back of the hands. The legs were assembled backwards on mine, but they pop off the balljoints so easily, it's not even an issue to fix them.

Frostyfrost Von Frostfrostbox is only available in this Gumball Machine Surprise Unboxing set, nowhere else. Her mold will show up again in Series 5 as Richmond Cakesmore. 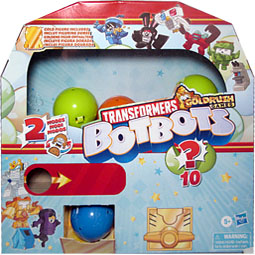 Rolling out of the slot next, we've got another blue!