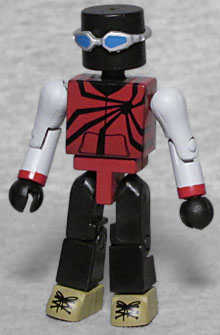 After trying to keep his spider-powers a secret, Miles is forced into action in a make-shift costume during the Secret Invasion of the Skrulls.

He did what? Secret Invasion was published in 2008; Miles Morales first appeared (in the Ultimate universe) in 2011. Guess that's part of his retconned history now that he's part of 616. This costume was designed by Nelson Blake II, and represents a bunch of clothes Miles grabbed from an overpriced store in a pinch: a hoodie, sweatpants, and a pair of Timbs. Not sure why the crotch block is red when it should be the same black as the rest of the pants, nor why there are no stripes down the outside of the legs. The goggles are new, and can be pulled up to reveal his eyes. 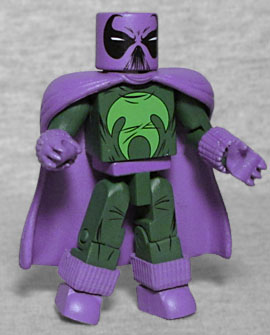 Hobie Brown was a costumed criminal, committing robberies as the Prowler, but he has since reformed assisting Spider-Man on numerous occasions.

Prowler is rocking his "proto-Spawn" look pretty nicely here, with the dark patches around his eyes, and the big cape. The choice to give him the "clawed" Minimate hands is perfect for the character, and Black Widow bracelets complete the look. There's still that entirely undecipherable symbol on his chest, though the way it's rendered here makes it look like a tiny doll body hanging from his neck, stubby little limbs and all.

Series 77 is one of the ones that has a Build-A-Figure, so the set includes some pieces for that. The figure is the Spider-Slayer, and the pieces are his torso and coverings.