Ah, babies! The things that take all your money and keep you from spending it on better things. They're so needy that apparently there are entire stores dedicated to nothing but the extraneous crap required to keep the little mooches alive - at least, that's what we have to assume, since the Goo Goo Groupies exist. In fact, the Transformers BotBots mall has two such stores in the east wing, with Nampy being found down on the ground floor.

As far as baby necessities go, the kennel is an important one. 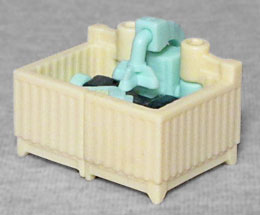 Sure, they may call it a "crib," but it's a baby jail. It used to be that babies slept in the bed with their mother, because homes weren't well heated, but that required devices (like the Italian arcuccio) which prevented exhausted moms from rolling over on their kid in the middle of the night. Eventually dropping them in a slatted box next to the bed was enough, which is why we've got cribs today. This one is pale colors, like most baby stuff, and a mobile hangs above it. Or "in" it, really, but that's just the way the toy is made. The slats are sculpted, rather than actually being hollow, and six small feet hold the crib up off the ground.

BotBots are small and easy to convert - for instance, all you need to do here is pull back the arm on the mobile, spread the sides of the crib outward, then straighten the robot body within. Oh, and remove the mobile part of the mobile, because it becomes a walking stick.

Nampy needs naps. He's a loving grandpa, but can get cranky when the little bots get too rambunctious before he's had his nap. Nampy is known to say:

"I'm too old for this!" before converting to crib-mode for some much needed Z's.

Boy, BotBots really loves its dragons, doesn't it? Nampy is very blocky, with a head that looks like Truckasaurus and a band across his eyes that makes him look like a Ninja Turtle. his shoulders are very wide, which is good, because it means his cane has the clearance to not overlap with his feet. The instructions imply you can swivel the wings forward, but that isn't true. The pale blue and yellow are a nice combo, and the dark blue contrasts against them both. 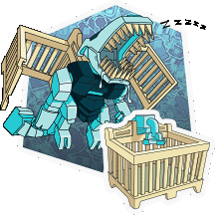 Nampy is available in a Goo Goo Groupies and a Fresh Squeezes 8-pack, and also in the blind-packs, where he's #18.