Remember the good ol' days, when the Transformers BotBots actually came with instruction sheets that showed us where they lived in the mall? If you look at the west wing, you'll find two stores where the Swag Stylers live. Ollie Bite lives down on the ground floor. 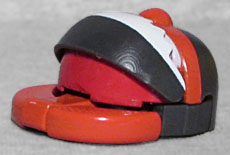 Trying to pass a baseball cap off as some kind of fancy status symbol reminds me of nothing so much as Key & Peele's "Dueling Hats" sketch - that perfectly flat bill says "I bought this to show off, not to enjoy." The sculpted stitching on the brim is nice, but there's a big flash of red across the top of the hat, no matter how you position the pieces; they should have painted part of it grey, to match the rest of the hat's body.

It's not hard to convert BotBots: all you have to do fold out the fin, hinge the bill down to the bottom and rotate it around, pull the arms out to the side, and swing down the legs. 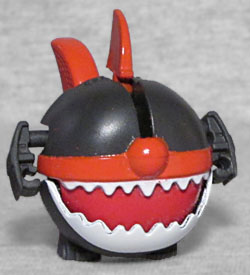 Bite, a super rad shark-hat bot who's swimming in skater style. Who cares if she doesn't actually skate? Or swim? She's brimming with radness.

In her robot mode, Ollie Bite looks a lot like a Sharkticon - round body, big mouth, tiny limbs, etc. The button on the top of the cap becomes a single cycloptic eye, and the jaw is hinged, so Ollie can actually bite! They should have named her "Bites," with an S, and also made her a him - Ollie Bites, "all he bites," get it? The "ollie" part of the name presumably comes from the skate trick, but would you really see a skater wearing a flat bill? Then again, they did say she was a poser, so maybe it works after all. 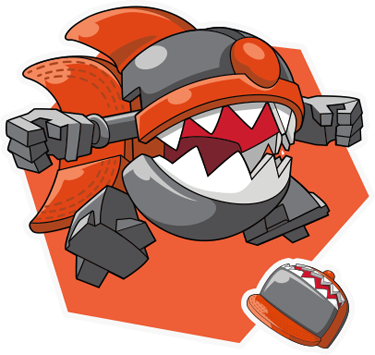 Ollie is one of the most plentiful Series 2 BotBots, available in four different packs: two Swag Stylers, one Spoiled Rotten, and even blind-packed (as #17). And that's good, because counting the altmode, the robot mode, and the conversion process, this is absolutely one of the best toys in the line.