The east wing of the Transformers BotBots mall is home to a simply gigantic play space stretching from the ground floor to the roof, because they had a lot of Arcade Renegades to introduce. That means there's plenty of room for prizes and games, with Pixelfin being found up on the highest level. 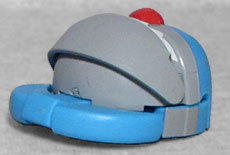 Pixelfin is the same baseball cap mold as Ollie Bites, just done in blue and gray instead of brick red and grey. It's still a nice look, helped in no small part by the fact that this time there's no big blantant stripe of the wrong color marring the front of the hat. The bill is far thicker than a real one would be, but if they'd molded it to be thin enough, it wouldn't have looked as good on the toy.

It's not hard to convert BotBots: all you have to do fold out the fin, hinge the bill down to the bottom and rotate it around, pull the arms out to the side, and swing down the legs. 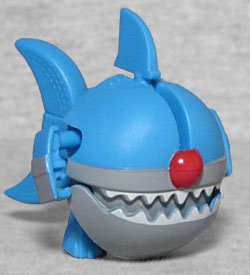 super pumped to see the top bots go head-to-head on his favorite arcade games. However, sitting on top of their heads while they're playing the game can be a little distracting.

Now that really seems like a stretch! The game machines being Arcade Renegades? Yes, absolutely. The food items? Eh, sketchy, but we'll allow it. Now we've got an item that isn't even meant to be a prize or part of the workers' uniforms, and is instead just a thing that someone wore in the arcade one time? That's pushing it. Not that the instuction sheet's decision to label him part of the Techie Team makes any more sense. Pixelfin is a great-looking robot with an articulated jaw, but his teeth aren't painted as prominently as Ollie's. 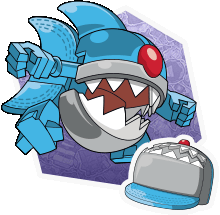 Pixelfin is only available in the Arcade Renegades Surprise set, of course, but he is available in three out of six versions of it, hidden down in one of the blind-pack buttons.