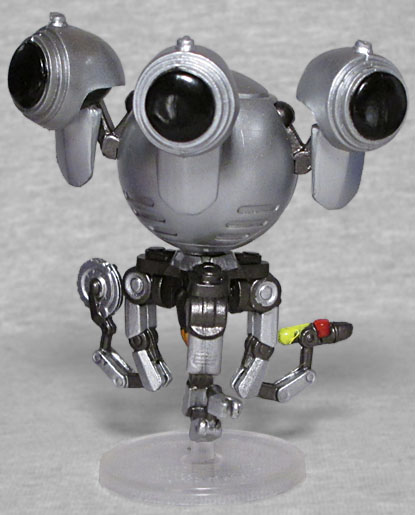 I've never played any of the real Fallout games, just Fallout Shelter. So all I know about the Mr. Handy robots is that they come in lunchboxes, you can only assign one per floor, and you can send them out into the Wasteland to collect bottle caps. Useful knowledge! Here's what Fallout 4 has to say about them: "Created by General Atomics International as a domestic servant robot, Mister Handy is equipped with tools that can be used as weapons, if the need arises." Well, I guess that's why they're always grousing about cleaning. 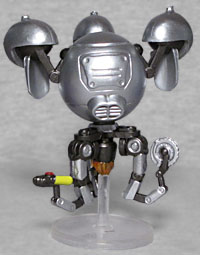 and represents the basic model - there are various named and specialized ones in the game as well (one of which, Curie, was available as a Hot Topic exclusive), but this is the vanilla version. The main body is a silver sphere, with three black "eyes" on stalks to give it a huge range of vision. There's an access hatch and a vent sculpted on the back, and its three bent arms dangle below its body - one has a buzzsaw, one has a little pincer, and one has an unidentifiable device that's apparently a flamethrower. Since Mr. Handy robots hover, this Mystery Mini is posed on a clear stand, which hold him up slightly. A gout of orange flame shoots out of its exhaust port, helping sell the illusion. There's no articulation, of course, but Mr. Handy looks fine hovering around behind other characters.

Mr. Handy is available in a 1:12 ratio, in the rear left corner on the top layer.