Series 4 of the Transformers BotBots introduces a whopping eight new factions, which is the same number Series 1 started with, and the number Series 2 and 3 came up with combined! Today's BotBot comes from the Movie Moguls, which tells us that although Hasbro no longer gives us fun maps of the mall, it must have a cinemaplex attached to it somewhere.

Lumidope is a flashlight, the same mold as Series 1's Dimlit 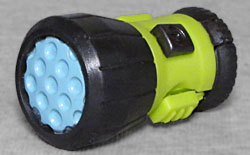 and Series 3's Terror Tale Torch. Those flashlights were yellow and red, respectively, while this one is a lime green. The idea is that he's one of those lights the theater ushers use when they're doing their mid-movie walkthrough, but ushers don't really use this kind of flashlight - their light needs to be visible but not distracting, while an LED torch like this would blind the audience. Which would probably hamper their enjoyment. 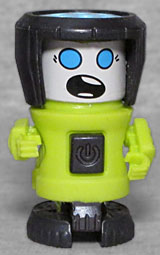 catch any bots making mischief in the theater! But, uh, ah, he wants all bots to please enjoy the movie. They better behave or he'll shine his light right in their face! But, um, um, he's really sorry for the disturbance. Lumidope is ready to lay down the law! Once all the paralyzing fear goes away...

Lumidope remains a robot that looks very similar to a flashlight - so much so that some of the stock photography for this mold forgets to turn the cap around to hide the face, and no one noticed before they were approved and released. The hands don't get any paint this time, so they're the same green as the rest of the body. The face is super cute, with a total "gasp, look at THAT!" kind of expression thanks to the large solid blue eyes and the wide open mouth. 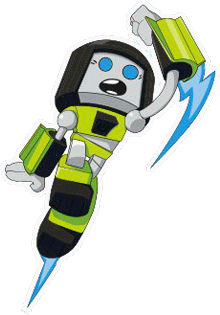 This figure is available in two of the four Movie Moguls 8-packs.