When the second series of Transformers BotBots came out, the diagram of the mall showed us that the Music Mob had two stores: one on the third floor, and another right below it on the second. Right below it? That kind of foolishness is usually reserved for GameStop! Dizzy Bones lives on the second floor. 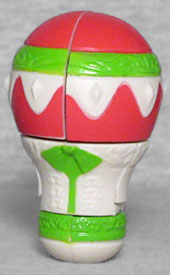 Maracas are used as musical instruments today, but their origin is pre-Columbian, and back then they were used in religious ceremonies to represent and summon spirits. They're basically a dried gourd with seeds or pebbles rattling around inside, though now they're often made from wood or plastic. Especially when they're a toy. This one is an off-white, with red and green decorations - a very Mexican colorscheme. There are sculpted patterns on the outside of the maraca, rather than it being completely smooth, adding a little visual and tactile excitement to the surface.

Dizzy Bones loves to celebrate, and a celebration calls for music! 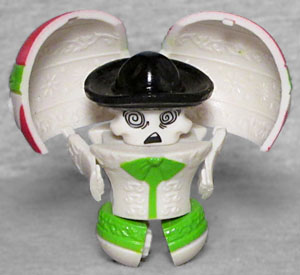 He's constantly shaking out rhythms. All that shaking has really rattled his brains and scrambled his circuits. He can't walk in a straight line, so he rhumbas everywhere he goes.

Dizzy Bones has a really cute robot mode, with sculpted details that make him look like he's wearing a fancy jacket, and his eyes are off-kilter swirls. He's even wearing a black sombrero! The sculpted details on the inside of the dome almost feel like a cartoon character seeing birdies after getting hit on the head. It's a little hard to get him to balance, but they made the feet large enough to give him a fighting chance. 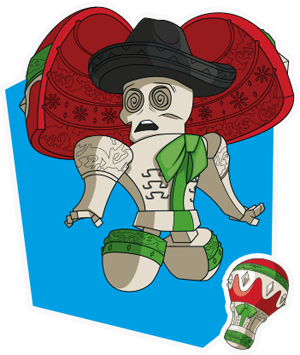 Part of Series 2, Dizzy Bones is available in Music Mob and Spoiled Rottens 5-packs, or a Swag Stylers 8-pack. And the mold was recolored for Series 3.