The Transformers BotBots no longer come with maps showing them partying in the mall where they live, so maybe one of the extra Greaser Gang restaurants in the earlier series has gone out of business, to be replaced by a Latin American eatery where Los Deliciosos can live and spread their spicy fun.

Tacos are an ancient food - Mayan legend says tortillas were invented by a peasant for his hungry king, and it's not like you'd just eat a tortilla without filling it 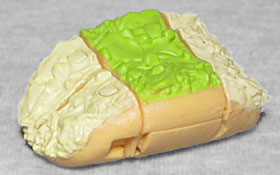 with something - but the first visual record of them comes from the 1920s, in a photo of a woman selling tacos de canasta (tacos from a basket). The sculpted filling in this taco is all just chopped up "stuff," with no clear delineation between ingredients - that's why each use of the mold has been able to paint it different ways. Judging by the promo photos, this is meant to be lettuce or guac on top of chicken salad, but the green apps on the ends were skipped, so we get a hard line that makes it look like a neopolitan taco.

A skeptical Bok Bok Bok-O was getting hypnotized by another bot one day and was getting sleepy, veeeery sleeeeepy. Then, after the count of three, 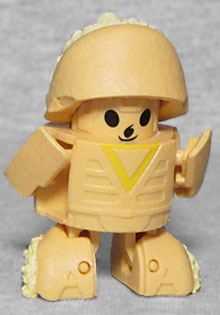 1... 2... 3... bok bok bok! The chicken taco bot awoke and thought she was a chicken. She was boking and walking like a chicken and pecking at every bot in sight. Tho this day, no bot knows how to reverse it.

Oh, I get it now! The name made me think this was supposed to have something to do with bok choy. Also, who spells a chicken noise "bok" and not "bawk"? The poor paint choices continue in this mode, but at least here the badness is intentional? DJ Baby Bok Choy gets absolutely no patterns or colors on her robot mode, leaving the entire thing the golden color of the taco shell. Plus the filling is light colored, so there's no visual zazz there, either. This does allow us to appreciate the sculpted details a little more, but so would just painting them. The large black eyes and circular mouth make this look more like one of those little coconut things from Moana, not a robot who thinks it's Roger Clemens. 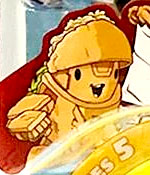 Part of Series 5, Bok Bok Bok-O is available in a Los Deliciosos 5-pack and a Frequent Flyers 8-pack. Which is honestly way too much, because this version of the mold sucks. Get one of the other two instead.