Hasbro brought a Transformers BotBots exclusive with them to San Diego Comic-Con last year: the "Con Crew" set, which featured 'bots from three different factions: the Line League, the Fantastic Fuelers, and the Meet n' Greets. 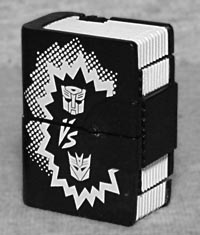 Here we have something you're sure to find at a comic con: a book. This same mold has been used five times now, but at least its colors keep changing: first it was blue, then pink, then white and tan, then red, with this one being black. The pages are white, and there's a strap holding the book closed - this must be one fancy deluxe edition! That would certainly explain why it's so extraordinarily thick. The cover suggests the comic is about Autobots vs. Decepticons, so apparently Transformers exists as a brand within the world of BotBots. How recursive!

BotBots are meant to be easy to convert. Here, you open the halves of the book cover, then pull the entire body down from within the head. So simple!

Don't miss your chance to meet the legendary Inky Inkerson. The guest asks that no one bring up the movie adaptation to the graphic novel 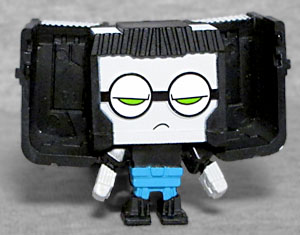 because the book, as always, is far superior.

The face of this BotBot is sculpted with large round circles on it, so every version of the mold has been wearing glasses. Inky Inkerson's eyes are half-closed behind the lenses, creating a look of impatient annoyance that's furthered by his small, frowny mouth. The majority of his body is black, making any particular details are to see, but he's got light gray hands to match his face, and his hips and legs are bright blue. His only articulation is balljoints at the shoulders - a situation that's not great, because the book kibble hanging off his head makes him incredibly back-heavy and nearly impossible to stand without leaning on something. 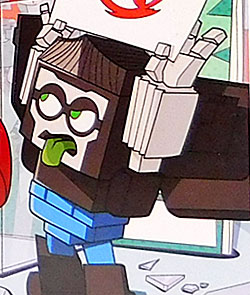