It used to be that each new series of Transformers BotBots came with a sheet illustrating the mall they lived in, and where their stores could be found. Not any more, sadly, so we're left to wonder. We know the Party Favors have to come from a party supply store, but as for where it might be, what floor it's on, who its neighbors are... that's all up to you and your imagination.

This is a party blower - you know, one of those things with 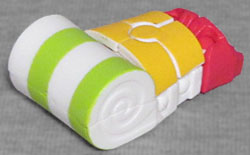 the tube of paper that unrolls when you blow into it, making a loud honking sound? Everybody's familiar with the basic item, though there's no single consistent name for it. [You mean not every small child pleads with their parents to provide them a "free-reed aerophone" like we did in our gay days of youth? --ed.] The colors are bright and playful, with the mouthpiece being bright red, the central body yellow, and the coiled paper part is white-and-green striped.

Converting BotBots is simple. For this one, you spread the yellow panels and fold up the feet. There are no instructions included, so if we say he looks better if you spin the top two flaps around on their balljoints so they face backwards, there's nothing to say that's not the right way to do it.

Come one, come all! See the downer of a clowner! The melancholy mime! The saddest bot around, Wah-Waah the Clown! He can't juggle! He doesn't do tricks! 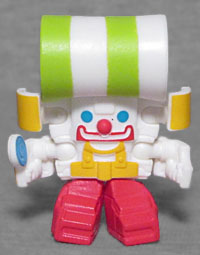 His jokes fall flat every time! Step right up for the worst time you've ever had!

We should have guessed he'd be sad when we realized Wah-Waah the Clown was named after the "sad trombone" sound. Of course, he's still molded with a big smile, so that's an informed attribute. He's holding a blue lollipop or some similar item, and appears to be wearing yellow overalls. Because of the way the feet move, they tend to pop off their balljoints when you change modes, but they go back on with no trouble. There's a lot of fun repaint potential with this mold: he'll always be a clown, so paint him like famous clowns! Give us a Ronald McDonald. Give us a Pennywise. Either Pennywise! Krusty, Bozo, Doink, Violent J and Shaggy 2 Dope... so many options! 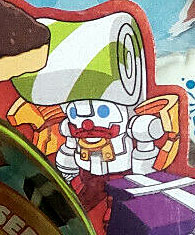 Wah-Waah is a good start, but there's more to be done with him in the future. He's currently available in two Party Favors 5-packs and a Hibotchi Heats 8-pack.