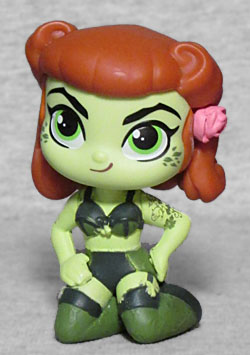 In the Bombshells world, Poison Ivy is French smuggler Pamela Ysley. She worked for Selina Digatti until the Nazis invaded France, when she was forced to use her smuggling connections to procure luxuries for them. Getting her hands on rare chemicals, she homebrewed a perfume that smelled so sweet, it made anyone who smelled it drowsy. Then she went after them with her garden shears, because you don't beat bigots in a polite debate, you beat them in the streets. She was so happy with her revenge, she didn't even mind too much that the concoction also turned her green. In the normal comics, Ivy was a villain who had to slowly turn good (before that got thrown out the window by a lazy writer); in Bombshells, she was just morally gray before deciding to stand up for what's right.

The Poison Ivy Mystery Mini partially copies the statue's pose: she's kneeling on the ground, but instead of having her hands behind her head, 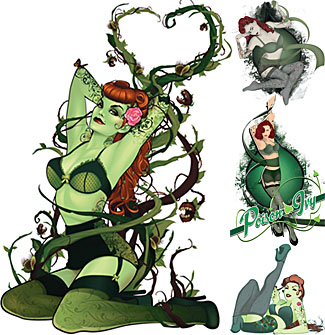 they're on her hips. Primarily because Mystery Mini heads are so big that there's no way they could ever get their arms behind them realistically. Her orange hair is done up in victory rolls, and there's a pink rose tucked behind her left ear.

Ivy's wearing her sexiest 1940s underwear, which is painted various shades of green. The bows on the garters and the bra are the same color as her skin, which makes the paint look unintentionally sloppy. The face is more "friendly" than "seductive," and she's got odd splotches on her cheeks next to her eyes - they're not something from the original design, so are they supposed to be freckles or something? They did get the tattoo on her left arm though.