Wing 3 of the Transformers BotBots mall is home to a simply gigantic play space stretching from the ground floor to the roof, because they had a lot of Arcade Renegades to introduce. That means there's plenty of room for prizes and games, with Old Cool being found down on the lowest level. 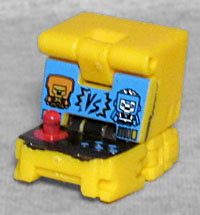 Despite being one of the Arcade Renegades, this is not something you'd likely find in an arcade. Yes, it's a game cabinet, but look at the shape of it: the base is so low, it's clear this is one of those little tabletop throwback machines, probably loaded with, like, 50 games or something. The one on the screen appears to be... a fighting game? Between Angry Cheese and Cocoa Crazy? Or at least preliminary designs of them. The cabinet itself is yellow, with a blue screen, and the control board is black with five blue buttons and a red joystick.

BotBots are easy to convert. For Old Cool, all you have to do is fold out the arms and legs, drop down the body, and flip the screen up on top of the head.

Old Cool is always ranting about how modern arcade games are 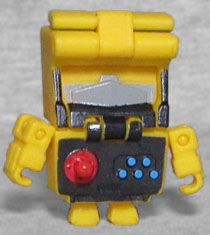 too easy to play. He's always reminiscing about how back in his day it was 1 token, 3 lives, and no save points. He's like: "That was pure, man. That was keeping it real."

Well of course there were life-limits, the entire point was to get you to spend more money. Old Cool is a neat looking robot, very square and blocky, but also decently proportioned. The head is large, with a silver mouthplate, and although the legs are exceedingly tiny, he still stands steadily. The buttons on the chest keep the body from looking boring, as well. The only articulation in this mode are the shoulders, but they're balljoints, so at least they can go all over the place. 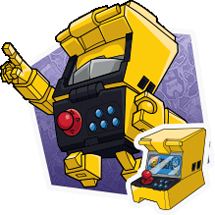 Old Cool is only available in the Arcade Renegades 16-pack - as one of the new molds, he's visible up in the top section, rather than being blind-packed. The mold was also used in Series 5 as Outta Order.