The Disney Renaissance Ariel started really hit with Beauty and the Beast, the movie so good that it was the first animated feature ever nominated for the Best Picture Oscar (and, thanks to the creation of the "Best Animated Feature" category, was also the last until Best Picture nominations were expanded from five to 10 in 2009).

We don't really do a lot of Disney here, because they don't do a lot of our kind of toys, but this is the third Belle we've reviewed, which should also speak to her importance. Disney's Belle is more feminist than the nameless girl in the original story, being based in part on Katherine Hepburn's 1933 portrayal of Jo from Little Women - that's why she doesn't put up with any of Beast's guff.

In Ralph Breaks the Internet, Belle's comfy clothes are based on her yellow gown, which is disappointing for two reasons: one, if she really wanted to be comfy, wouldn't she go back to her more casual outfit? And two, the fact that she wore blue while wandering around her village badmouthing everyone was a specific choice, meant to make her stand out. Here, she's wearing a yellow tank top and shiny gold pants. The options Ami Thompson designed for Belle's top ranged from very characteristic (a stack of books that said "Reading is Not Weird") to the very uncharacteristic (a rose under glass with the phrase "Fragile" beneath it). One of them even read "Beast Mode" - that's right, a Transformers reference on a Disney princess! The final design (which did go through several iterations) is a silhouette of Beast's head with the slogan BFF - Beast Friends Forever. "Friends"? Oh snap, somebody just got #BEASTZONED! 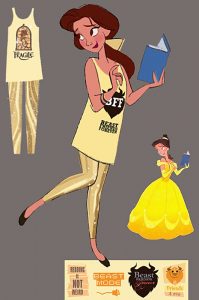 All the Comfy Princesses have the same joints: balljointed head, swivel/hinge shoulders and elbows, swivel/hinge hips, and knees that are ratchet joints inside a rubber sleeve, making the legs seamless. Rubber ankles mean they're very hard to stand, though. The hair is rooted, and shaped to match the style seen in the film - in Belle's case, a simple ponytail held in place by a yellow ribbon. She doesn't have any accessories, despite being shown reading a book (of course) both when she was wearing her dress and when she was relaxing.