Little Mermaid started the Disney Renaissance, Beauty and the Beast was the critical darling, but Aladdin was where the money train came a-rollin' in to KA-CHING station. By utterly cheating Robin Williams on his contract, Disney completely changed the way animated movies are made (or at least the way they're cast),

and raked in beaucoup bucks. Not bad for a petty ripoff of The Thief and the Cobbler, a labor of love that had been in development for nearly three decades!

The movie also had that particular brand of '90s Disney feminism, where "I can do things myself" counted as progressive. Plus, Jasmine was the first non-white Disney Princess, a fact that these days would have had the internet's worst people crying about "forced diversity." While you'd think her usual outfit of big poofy pants and an off-the-shoulder top would be comfy enough already, apparently she felt the need to switch to spangly blue pants and a couple of tank tops (in the movie, she wears a blue one over a black one, but this toy only does the outer layer). The logo on the shirt is Genie's hand holding up three fingers above the word "Wishes," which is apparently the only design they ever considered? Or at least the only one they've ever revealed. We can't definitively prove that they tried one with an image of the lamp and the phrase "rub one out," but also no one can prove they didn't. Hey, if Aurora can have a drug reference and Belle isn't wearing any underwear, then Jasmine can get her personal freak on. She's one of the figures who has an accessory: the inhaler she uses to control her cat allergies. It's rubberbanded to her hand, and there's a handle on the back so she can hold it even without. 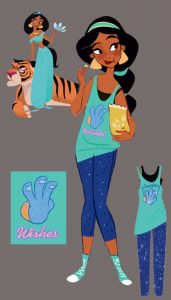 All the Comfy Princesses have the same joints: balljointed head, swivel/hinge shoulders and elbows, swivel/hinge hips, and knees that are ratchet joints inside a rubber sleeve, making the legs seamless. Rubber ankles mean they're very hard to stand, though. The hair is rooted, and shaped to match the style seen in the film; in Jasmine's case, a long ponytail, tied by ribbons and held back with a headband. Like Ariel, a bit of the hair has been waxed to make sure it retains its shape.