After a string of huge successes, we come to the point where Disney inevitably began to stumble. Pocahontas got a pass at the time because Disney was still riding high off The Lion King, but looking back now? This movie being followed by Hunchback of Notre Dame and Hercules makes it pretty clear 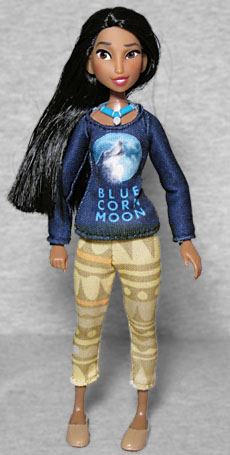 they were going into a slump. Pocahontas was the first Disney princess knowingly based on a real person, and also the first American. Although she's generally called a princess even out here in the real world, Native American nations didn't have that kind of monarchy: their leaders were chosen much like a president or prime minister is today; but English settlers, not having any concept of "ruling by popular acclaim for a limited period of time," called the chiefs kings.

I may not know much about women's clothes, but I'd think that a simple dress would be more comfortable than a long-sleeved shirt and stretch pants. Who's in charge of deciding what "comfy" means for these poor girls, anyway? [Griselda Sastrawinata and Ami Thompson --ed.] The shirt is indigo, with an image of a wolf holing in front of the moon. Sorry, a wolf crying to the blue corn moon. The other designs Cory Loftis suggested also referenced "Colors of the Wind," plus one that had what appears to be a raccoon footprint. Meeko! Her pants have geometric patterns on them, and her sleeves cover up her tattoo (or lack thereof, as the case may be). She's also wearing tan shoes, which is definitely less comfy than going barefoot, and still has her necklace. 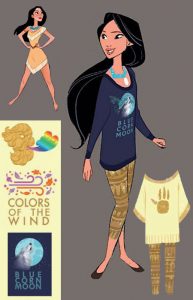 All the Comfy Princesses have the same joints: balljointed head, swivel/hinge shoulders and elbows, swivel/hinge hips, and knees that are ratchet joints inside a rubber sleeve, making the legs seamless. Rubber ankles mean they're very hard to stand, though. The hair is rooted, and shaped to match the style seen in the film; since a running gag was that her hair was always gently blowing in an unseen wind (even indoors), the doll's hair has been waxed to drift to the side.