Raw10 may be a new original property from McFarlane Toys, but it's always nice to have some old favorites drop by, as well. 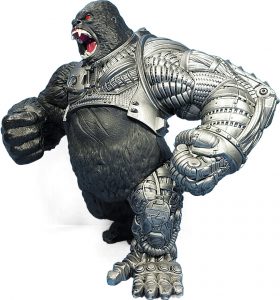 Cy-Gor is the pinnacle of the Robotic Animal Weapon (RAW) labs' science. He is the perfect combination of beast and machine. Designed as a test subject for RAW's newest cybernetic enhancements, Cy-Gor exceeded his potential to become RAW's greatest success. His brute strength is augmented with metallic muscles and his intellect, instincts and reflexes are perfectly-tuned with his built-in combat matrix. He was created to be a next-gen warrior. Now, the perfect weapon is on the loose and out of control. 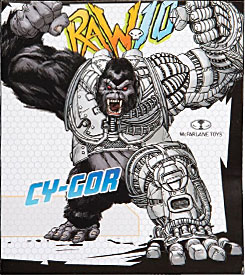 That suggests Raw10 is happening in its own alternate reality: Spawn's Cy-gor had his own little origin, and it didn't involve anything called the Robotic Animal Weapon Lab: he was a good friend of Al Simmons who got his brain put in a monkey body when he asked too many questions about what happened to Al on his last mission. Into the Cygor-Verse! Raw10 Cy-Gor has swivels at the neck and arms, but it's quite apparent he's only meant to ever has his fists raised above his head to rain down blows, not to drop his arms to his sides, and the V-crotch doesn't serve much purpose at all. An old-fashioned do-nothing McFarlane toy. 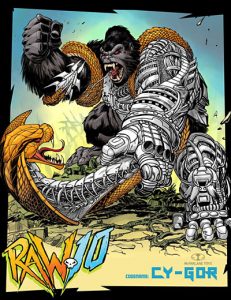 Cy-Gor, the cybernetic-gorilla brute, battles his nemesis Battlesnake in the Lost Jungles of Serpent Island. The terrible snake king's Coil Attack is no match for Cy-Gor's Power Slam! But this fight is far from over.

Like Poe said, nothing can prepare you for the size of this figure until you see it in person. It towers over everything, yet thanks to its rotocast construction, it only costs $20US new! Todd has not skimped on the sculpt, loading this monkey up with intricately mechanical shapes on his prosthetic arm, leg, and chest. His fur sweeps around his body realistically, and there are a few deep gashes on his torso, thanks to all the fights he's been in.

Each Raw10 release includes a pamphlet that features an image of them and their bio on one side, the bio for the other three figures on the other side, and then unfolds into a little poster of their "comic" art. It's funny that Cy-Gor's has him fighting Battlesnake and Battlesnake's has him fighting Raptar, but of course no one can fight Fren-Z but another shark. [one creature invariably eats another to survive --ed.]

We got four figures in this first series, plus hints at three repaints. Add three more characters in, and McFarlane would actually hit a benchmark of 10 Raw10 toys. Is that the goal? I suppose we'll find out in time.