When it comes to the Transformers BotBots and the Arcade Renegades, what's more unbelievable: that there's either A) a single, three-story tall arcade over in the third side of the mall or B) three unrelated arcades stacked directly one on top of the other, or that this/these arcade locations would allow food and drink inside?

Popcorn is kind of fascinating. It's our only exploding food. Ancient corn (or maize, since "corn" is just generic term for the edible seed parts of any given grain, which is why the word appears in some translations of the Bible despite it being written 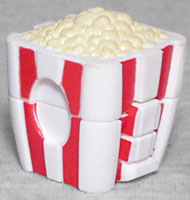 at least five years before anyone from that hemisphere discovered the Americas) was first cultivated in southern Mexico, but the kernals were so hard and indigestible, the only way to get any value from them was to pop them open. After the Civil War, popcorn's popularity exploded thanks to the development of popcorn poppers. Popcorn was the first American breakfast cereal, touted at the Battle Creek Sanitarium (as part of a plan to curb masturbation) by Dr. John H. Kellogg; Doctor John's brother, W.K., set about marketing Corn Flakes because he couldn't figure out how to package pre-popped corn. This red-and-white striped carton has four distinct sides, rather than being a round bucket, and the corn sticking out the top is a nice pale yellow.

The conversion process is simple: fold the legs down, pull the arms out to the sides, and lift the head.

Cackle Corn is a bucket of chuckles that giggles, snorts, snickers, 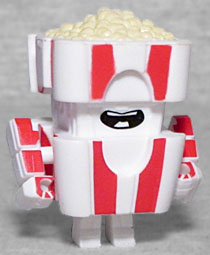 and howls with laughter at just about everything. Sometimes he laughs so hard it seems like his head will pop off, especially with all the popcorn spewing out of his head.

Given the way popcorn works, you'd expect this BotBot to be angry, wouldn't you? Way to play against type! He doesn't get a real face, just a mouth revealed when you lift the head. Where are your eyes, Cackle Corn? Where is your nose? Smelling popcorn is half the fun of it! The semicircular divot where the eyes would be, coupled with the thick ridge around the head, makes him feel like Tri-Klops. The legs are very small, but the fact that Hasbro put red paint on the front of his arms rather than leaving them blank white is a nice touch. Keeps him from looking plain. 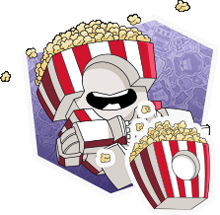 As one of the new molds, Cackle Corn was available in all six versions of the Arcade Renegades pack, visible up in the clear "screen" part of the package. The mold was also used to make the Series 4 Winner's Circle Bot Pop O' Gold.