Not all the Transformers BotBots make sense. For instance, this bot is a member of the Toilet Troop (even hanging out by the plunger store down on ground level), but there's nothing about them that actually belongs with that tribe. 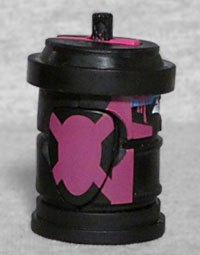 This is an aerosol can, just a cylinder with caps ate the top and bottom, and a nozzle sticking up off the center of the lid. Okay, that's fine: it's part of the Toilet Troop, so maybe it's spray-on deodorant, or spray cleaner, or even air freshener for those extra-stinky days? Nope: spray paint. A can of spray paint. Who's keeping spray paint in their bathroom and why? The shape of the altmode looks good enough, but the paint decos need work: the robot's face is not concealed at all, and the pink on the sides is too incomplete to be a design on the bottle, but too precise to just be spilled paint. It just doesn't look good.

Even the conversion is disappointing. You pull the arms out to the side, spread the feet, and flip the nozzle over. At least if the cap of the can had to be raised, we might get to conceal the robot face, but no: I thought it might do that, and ended up just pulling the lid off entirely. 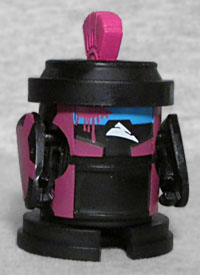 Frohawk isn't afraid to break the rules. She can paint on any surface, no matter how hard it is to get to. No bot can figureout how she does it! No one knows where she'll strike next!

Frohawk is a stumpy little Bot, since the legs only go out to the sides, not down. Her face consists of a blue visor for the eyes and triangular sneer that, coupled with the pink mohawk, really sells the idea of her being a punk. Again the colors on the body are disappointing, with the magenta sections looking neither random nor intentional. Frohawk could have been good, but in practice feels half-baked. 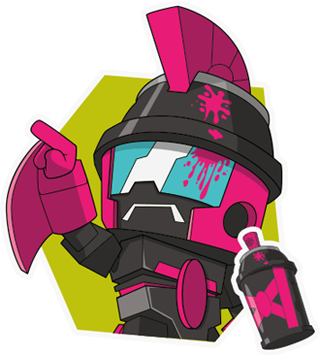 Part of Series 1, Frohawk was available in a Toilet Troop 5-pack, or a Greaser Gang 8-pack. The mold was also reused in Series 2 (as Rebugnant) and Series 3 (as Stringaling).