Tucked into a ground-floor corner in the third part of the BotBots' mall is a seasonal store that's making the transition from Halloween displays to Christmas. Stringaling is playing outside the front door. 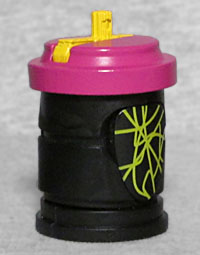 The things we said about Frohawk in Series 1 are all still true here in Series 3: this is an aerosol can, with a decent sculpt but kind of messed up paint. Not even a token effort is made to conceal the robot's face, and the designers have chosen to leave big gaps in the decorative paint that just make the toy look incomplete. This is a black can with a pink lid and yellow nozzle, and thin yellow and blue lines in various spots on the sides.

(As bad as it is, Series 2's Rebugnant was even worse, with the can's label right beneath the robot face, so you couldn't even turn the toy around to pretend not to see it.)

To convert, flip the nozzle over, spread the feet to the sides, and pull the arms out. Simple. Too simple.

He sprays his string on everything, he's the super silly Stringaling! 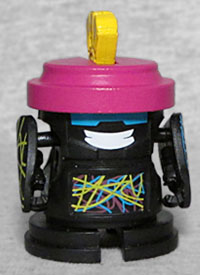 We started today's review by talking about how sometimes BotBots don't make sense, and this is another fine example. Stringaling is part of the Seasons Greeters, yeah? And he's shown hanging out by Wizengreen the Giftsmas tree, yeah? So you'd think he was a can of flocking, for making the tree look snowy, yes? No. He's silly string. The stuff you play with outside in the summer, not put on a dang Giftsmas tree! Stringaling has the same blue visor as Frohawk, but a bit toothy smile instead of a sneer. Big whoop. 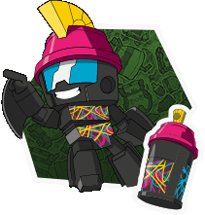 Stringaling is available in two Seasons Greeters 5-packs (one of them as the blind-pack for some reason) and a Fresh Squeezes 8-pack. But really, don't feel like you need to get any version of this mold; none of them are great.