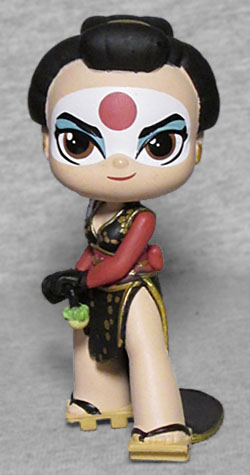 Since the time we reviewed the DC Direct Bombshells Katana figure, Tatsu Yamashiro has appeared in the comics - barely. She showed up in Bombshells United #6 (#11 if you're reading the digital editions), performing a haiku spell to awaken the soul within her blade - but since Bombshells isn't about boys, the soul in her sword is her sister, not her husband. She's then entirely absent from the book until #17 (digital #33), when we're told - not shown - that she put down a ghostly invasion of Japan by the spirits of the restless dead, then in #18 (#35) stopping a nuclear bomb and defeating Black Lanterns. Basically, her entire role in the story was "meanwhile, elsewhere" montage scenes. 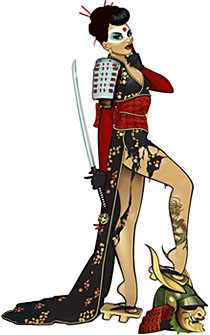 Mystery Mini Katana wears the same thing as action figure Katana and statue Katana: tall sandals, a torn kimono, some armor on the right shoulder, and a fancy hairdo. (In the comic, her kimono was just short in the front, but the tear-away look matches the original intent.) Her facepaint "mask" is painted on, but it for some reason sits remarkably low on the face; like, there shouldn't be such a huge gap between it and her hairline. The mini has an awesome pose, holding her sword low and back, ready for a fight. And unlike the DCD figure, this one actually gets the little Creeper charm dangling off the end of her katana's hilt, as seen in the original art. That's a nice plus!