Do you know why Mr. Potato Head is the mascot for Hasbro? They're a huge, successful company with lots of famous properties, so why the spud? Because it was their first distinct toy. Originally a textile company, then one that made school supplies, 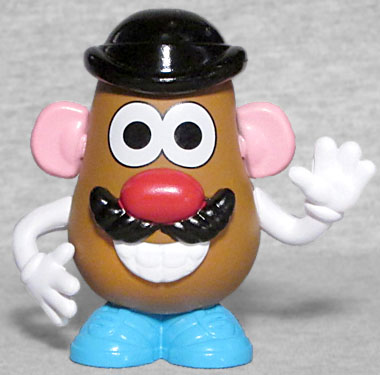 they'd sold modelling clay and pretend doctor's kits in the early '40s, but when they bought George Lerner's idea for a "funny face man" set in 1952, it was a huge hit. Partially because it was the first toy ever advertised on television, and the first time ads were aimed at children instead of their parents.

The original Mr. Potato Head Funny Face Kit was just bodyparts - kids were expected to provide their own potato (or comparable vegetable) to be the head. While there had always been some complaints about wasting perfectly good food by turning it into a plaything, the real impetus for Hasbro including the molded plastic body were safety regulations of the mid-60s: the tabs on the backs of the pieces had to be blunted, and thus couldn't be pushed into a potato as easily any more. 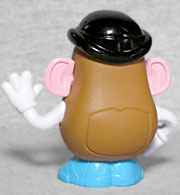 Funko's Retro Toys Mystery Minis are all based on Hasbro products, and Mr. Potato Head is one of the most common ones. This is the "basic" MPH, with a black bowler hat, big pink ears, a red nose, black mustache, big smile, white arms, and blue shoes. His eyes are only painted on, not molded, because... doing otherwise would have broken the Mystery Mini aesthetic? None of the pieces are removable, but they did remember to sculpt his butt-hatch, which is cool.

There's also a Mrs. Potato Dick Head in the series, plus an exclusive version 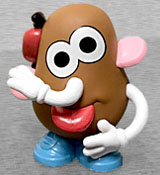 of Mister available only at Target. For the kids with no sense of what shapes represent or what a human body looks like, Mr. Potato Head's various parts can be swapped around freely (except for that period in the late-70s when the tabs were designed to only fit in one way). Representing that Picassoesque ability, the exclusive variant has his parts all mixed up: an ear where his arm should be, an arm coming out of his nose, and his nose and mustache up in the ear hole. Also, the eyes are painted on crooked, and he's sticking out his tongue instead of smiling. In Target's cases, both versions of him are in a 1:6 ratio, meaning two in every case and not a lot of room for much else.