Wreck-It Ralph 2 not only broke the internet, it also broke a major Disney rule. See, while the Disney princesses were bundled together as one "franchise" (ie, a way to sell merch), it was a firm rule that the girls would never actually interact with each other; they could be posed in groups in the artwork, but they would still be separate: not touching, or even making eye contact, as though they were each ensconced in their own little worlds, unaware of all the others. So among all the other hurdles the WiR2 writers had to clear, they also had to convince Disney to let the princesses meet each other. Clearly it worked out, or else Rapunzel's eyes 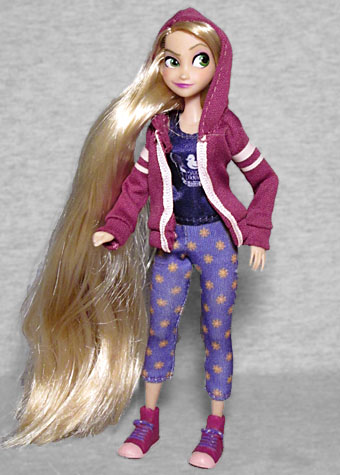 wouldn't be this far to the side, staring at one of her fellow ladies. Rappy was the first Disney Princess to be created in CGI, so the jump from her "home" reality to Wreck-It Ralph wasn't as huge as some of the others'. She was also the first white princess since 1991, and the first blonde one since 1959!

Although she did end up going brunette in her own movie, she's generally still shown with the long blonde hair in Princess merchandise, including this toy: she's wearing a lilac hoodie, and the hair spilling out the side of her hood is still long enough to reach the ground (not quite the 70 feet she was originally animated with, but definitely more than the other girls get). She's wearing sneakers, and her pants are dotted with the sunburst crest of Corona. Yes, her home kingdom is called "Corona" and she keeps away from other people. Some things are just weirder in hindsight. While the final version of her shirt says "We Gotta Dream - Snuggly Duckling Roadhouse" (though the toy's shirt is missing the first line, and the crossed swords behind the duck), writer Pamela Ribon was really pulling for "Long Hair, Don't Care." Her signature color is purple, because that's the color of the flowers on the plant that gave her her name - rampion, aka "rapunzel" (from the Latin rapunculus, meaning "little turnip") was a common plant in Europe, with its leaves and root both being edible. 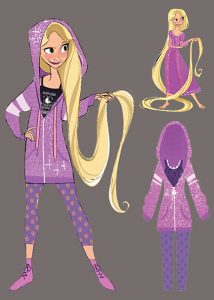 All the Comfy Princesses have the same joints: balljointed head, swivel/hinge shoulders and elbows, swivel/hinge hips, and knees that are ratchet joints inside a rubber sleeve, making the legs seamless. Rubber ankles mean they're very hard to stand, though. The hair is rooted, and shaped to match the style seen in the film. My Rapunzel has two right hands, but that's something I did to her: originally it was Belle who had the incorrect arm, but Rapunzel's skintone was close enough, and I figured the long sleeve of her hoodie would hide it. Sure enough, one boil-and-pop later, no one is any the wiser.