Beasts of the Mesozoic Monoclonius addendum

Today's review repeatedly hinted at the Beasts of the Mesozoic Monoclonius having some sort of secret origin, but never outright said what it was. Well, dear reader, we have the reveal for you here. 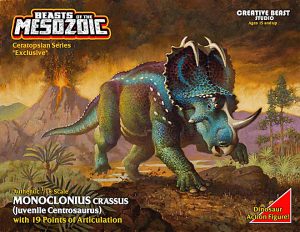 That's the packaging for the Monoclonius, with art by Ezra Tucker. It's a little different than the boxes for all the other Ceratopsian Series figures, with a full sleeve covering the entire box instead of just the right side, giving plenty of room for the Monoclonius' portrait. It's a nice image, hand-painted in acrylic on illustration board, showing our little Mono tromping about in an appropriately ancient scene - odd plants, a volcano, dark skies, etc. His blues really pop against the brown background, but not in an unnatural way. Tucker did excellent work.

Of course, that's to be expected. Although he's been doing his own personal wildlife art for the past 20 years, Ezra Tucker used to be a commercial artist. He did one of the posters for The Neverending Story, for example. But the reason Creative Beast brought him out of retirement for this project is because of something else he did: he was one of the artists who worked on Tyco's 1988 Dino-Riders line, which included-- *drumroll* --a Monoclonius of its own! And, why, just look at its packaging! 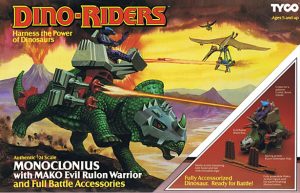 As you can see, not only are the style and the scene both inspired by the old look, the Monoclonius gets its colors from the Dino-Riders toy.

Toy representations have really come a long way in the last 30 years, huh?

You can learn all about the Beasts of the Mesozoic packaging here, and compare it to the '80s original here. The homage continues inside, back, top and bottom... everywhere.

This entry was posted in addendums, Kickstarter and tagged dinosaurs. Bookmark the permalink.