Ren & Stimpy is one of those mysterious properties that was made by no one - like Minecraft, it came from space. It certainly wasn't created by a child predator who's dumbly mired in his own past. Maybe it arrived on the same spaceship that brought us Ender's Game, Harry Potter and Earthworm Jim. [No, I'm pretty sure at least a few of those were created by Hatsune Miku --ed.] 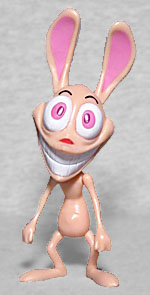 Ren Höek is an asthma-hound chihuahua with hyperactive, angry and psychotic tendencies. He's best friends with Stimpy, though he oftentimes takes on the role of the bossy leader of the duo.

Every few years, some company gets it into their heads to try making Ren & Stimpy figures. Last time it was Jazwares, in their 2012 Nicktoons line (a subsidiary of that Hanna-Barbera collection), and this time ("this time" meaning "2018," when these toys were apparently released) it's The Loyal Subjects, of Action Vinyls fame. 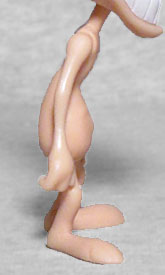 Whatever unknown force created Ren & Stimpy was no fan of standardized, repeatable character design, but we'd still say this Ren is more accurate to the cartoon than Palisades' was: he's hunched over rather than arched back, giving him a slight pot-belly. His protruding belly button is sculpted, though not the bumps of his spine. The head doesn't feel right, however: it's ovoid, like it typically is in the art, but when Ren's smiling like this, his head usually gets rounder. Additionally, his eyes are too symmetrical, and since he's usually shown in the art with his ears folded back, toys never look right when they have them pointed up. How about an angry variant with lidded eyes, a drooping mouth, and ears that go down instead of up? That would have been neat!

Ren is small, so he's light on articulation, moving only with balljoints at the head, shoulders, and hips. Because he's so small, he also gets an accessory: it's Log! Log! It's (not) big, it's (not) heavy, it's (sculpted like) wood! It's Log! Log! It's better than bad: it's good. It comes up about waist-high on Ren, is molded from brown plastic, and has a pale orange paint app on the exposed top. Nice!

When the show was pitched, Billy West was intended to voice both main characters, but Nick feared that this (along with his role[s] in Doug) would be too much work for him, so Ren was instead voiced by the show's creator... until he was fired for being terrible to work with, at which point West took over the role that was his in the first place. And hey, speaking of Billy West roles... 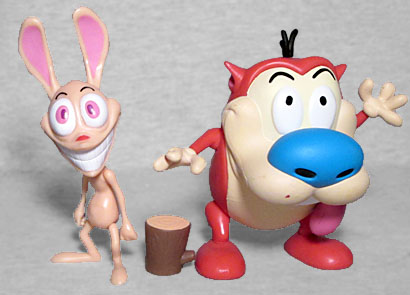 Pages: 1 2
This entry was posted in blog exclusive review. Bookmark the permalink.