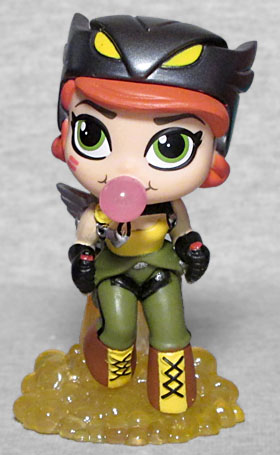 The DC Bombshells line added a lot of diversity to the ranks of the characters - not just of the LGBT variety (though they did obviously do that), but also ethnicities and nationalities. A new Elseworlds is a great excuse to stop everyone from being lily-white Americans, and Bombshells was all about it. Harley's from Britain instead of Brooklyn, Ivy grew up by the Seine instead of Seattle... so okay, they're both still white, but Hawkgirl is now Latina, having grown up in both Mexico and Brazil.

(Though she may still be an alien - yes, enough European heritage would mean it's possible for her to be a natural redhead, but all we know about her childhood is she grew up in an orphanage. Because her parents were on a different planet, maybe? The story never says, so you can imagine what you want.) 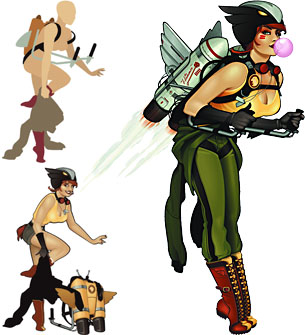 Bombshells Hawkgirl doesn't have her big naturals: the wings, that is. And she doesn't use gravity-defying metal to let her fly, either, opting instead for a Rocketeer-like jetpack she (presumably) built herself, being a fancy engineer and all. Her helmet has little winglets and angry yellow eyes, its shape reminiscent of her Wolverine-ish mask. This Mini may set a record for the amount of translucent plastic used on a non-translucent character: not only are the exhaust plumes from her jetpack yellow, but they also remembered to include her pink bubble gum, which is more than we can say for the action figure.