If we're reviewing a kind of Stripe today, we should really have a review of the plain one, right? But nobody's got time for that, so here's a quick and dirty version, because Gremlins themselves are quick and dirty. 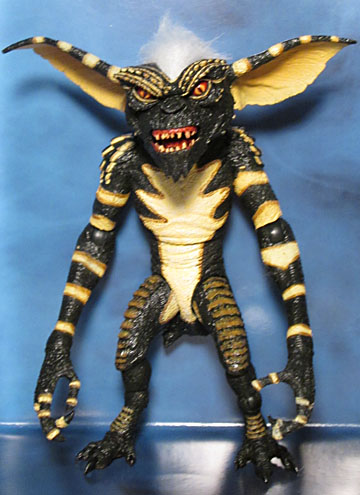 This figure is 95% identical to the Ultimate Gremlin, because of course it is. That mold's got more miles on it than the faces of the entire cast of The Expendables. The entire body and the ears are the same as the Ultimate figure, right down to the paint apps! That means the only new thing, the only thing that makes this "Stripe" instead of "Unidentified Gremlin #96," is the head.

The face is longer, with the eyes set higher up and titled at an angry angle instead of being

completely horizontal, and with big eyebrow ridges to match. The mouth is smaller, so he can look more sinister and less comedic, and the spikes on his chin form a distinctive "beard" that's longer than his brothers'. The typical Gremlins are scary, but cute in an ugly way - 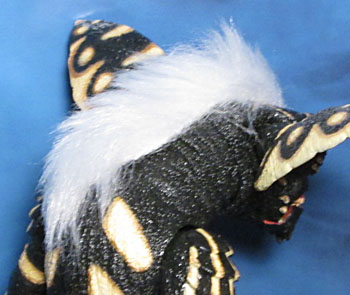 He does get his trademark lock of hair, a strip of synthetic fur trailing from his scalp to his shoulder blades. Since the modern figures are highly articulated, the mane had to contend with joints for both the head and neck, something it does by only being attached at the top, and letting the rest hang down. It works out pretty well, certainly better than the original. 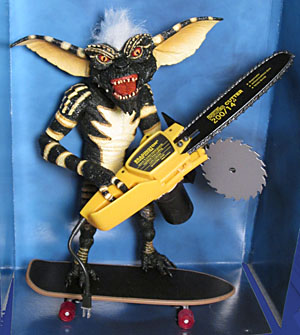 The accessories are lackluster by the standards of this line. Everybody else gets tons of interesting things, but all Stripe gets are a round saw blade (like the original had), an electric chainsaw with a cord that would be about 6" long at full scale, and a giant skateboard that shows just how far from a usable scale NECA's Gremlins are. Do you ever think NECA regrets getting locked in to this size back in 2003? Like, imagine if they did Gremlins that were closer in size to Chucky or Annabelle, the way they should be. Ones you could actually use with the rest of your collection.

Frankly, Stripe is a boring release. He doesn't have many accessories, and the ones he does have are dull. You're paying full price for just an alternate head.