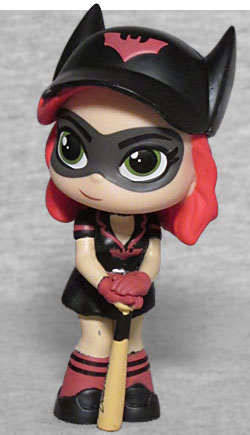 It certainly wasn't planned that Batwoman would be the first DC Bombshells action figure we reviewed and the last Mystery Mini to be pulled out of the box - not planned, just good parallel structure. It also helps that Batwoman was sort of the lynchpin of the series: everyone was important in their own way, but it feels like Bombshells was Batwoman's story.

Kate Kane was a globe-trotting adventurer, fought in the Spanish Civil War, came home to Gotham, joined an all-women's baseball team, and eventually started fighting crime in her uniform. You know: a typical life. Your grandmother did the same thing. She just never told you about it because you weren't her favorite. Shoulda made better macaroni art when you had the chance.

The statue version of Batwoman was sexy and flirty, but still conveyed strength, carrying her bat across her shoulders like the dang Bear Jew and standing with her feet flat on the ground and shoulder-width apart; this mini is less powerful and more coquettish, leaning over on her bat with her knees tucked together and her butt poking out for someone to look at. It's... presentational. Her name is printed down the side of her bat, and her costume is its usual black-and-red - there was a variant statue released showing her in her "away" colors (just swapping the black and red around), which would have worked okay for the Mystery Mini as well. The orange of her hair is brighter than the red of her clothes, and the grey around her eyes actually looks like a mask instead of messy mascara this time. The bat is very flexible, like Mera's pentadent, so it's a good thing it's not actually supporting the figurine's weight.