When I found a surprise Eternia Minis display at Target, it had pretty well been picked clean: there was space for dozens of figures, but only a few were left, so I didn't know who was in the line. A few Battle Armor Skeletors to dig through, sure, but who else?

Surprisingly, one of the property's major villains!

Evil-Lyn, the Evil Warrior Goddess, is the first female figure we've legitimatey gotten in either incarnation of this line: there was meant to be a She-Ra in the cancelled series, and the few samples that did get made were available as stolen factory samples, but Evil-Lyn is something you can legally buy. This is her classic costume, not the 2002 version: in other words, she's wearing two tones of blue and has yellow skin, instead of purples and gray. That leaves open a potential repaint later! She's armed with her magical staff, which can be held in either hand. Also, her size and proportions make her look like the old Superhero Squad toys from Hasbro. 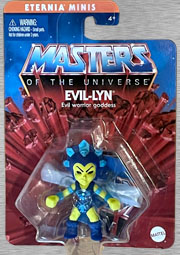 Technically Evil-Lyn isn't the only female figure available. Once you open the little retro blister cards these figures are sold on, you'll find an insert advertising the other figures that are supposedly available (if the display hasn't been stripped by other fans before you find it, that is): the Battle Armor Skeletor we mentioned before, a He-Man to match him, a re-release of Stratos, and then "Anti-Eternian" (ie, all-black with red highlights) versions of Ram-Man and Teela. Teela! An entirely new mold, whose normal colors will have to wait for a repaint, apparently. Here's hoping we actually get to Series 4 at some point, so she can be released.