So here's a surprise: walked into Target one day and saw a hanging display on the side of an endcap. It was Masters of the Universe-themed, and had MotU Minis 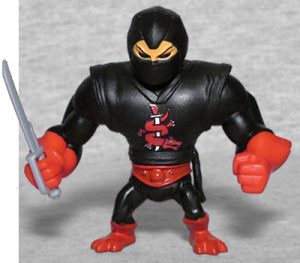 in the slots. New MotU Minis! Not just ones from the cancelled Series 2, ones that (as far as we knew) hadn't even been solicited. Hot diggety daffodil! One of the new figures was the Evil Ninja Master known as Ninjor.

In his one mini-comic appearance, Ninjor used He-Man's arms and legs, but that was changed before the toy went into production. This Mini follows his forebear's suit by using the arms and legs from Skeletor. The head and torso here are new molds, so they can look like baggy cloth, and the tampo on his chest (a red dragon winding around a sword) 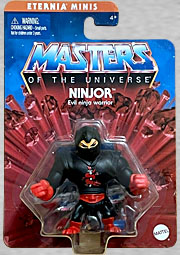 is applied very well. He's armed with the same sword Jitsu had, in gray instead of orange.

Rather than being sold in little plastic castles like Eternia Minis Series 1 and Series 2 were, these little oddballs are on blister cards that re-create the wintage '80s package design: blue along the top, exploding red stones everywhere else. Even the shaped blister (ie, something other than a plain rectangle) is a reference to the way things used to be. And double-bonus, no more blindpacks! Being able to see what you're buying before you buy it? What a novel idea!