Captain of the Royal Guard, she trains Prince Adam and aids 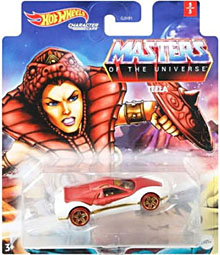 He-Man - unaware that the two are the same.

Then she's pretty dumb, since they used to look exactly alike. Of course, if the king and queen of a country hire a very pretty girl to privately "train" their wastrel son, they're not actually looking for a tutor, they're buying him a f!ckbuddy so he'll stop staining all the couches and knocking up the maids (it would have cost them a fortune to have the palace wizard working day and night on spells to perform "ab-Orko-tions," if you catch our drift), so brains probably weren't too high on the list of requirements. Or maybe they knew Teela was Sorceress' magical daughter, and wanted Adam to couple with her so their kingdoms would be united as one?

Fittingly, this is the smallest, sleekest car in the line. 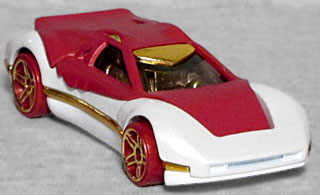 Teela was one of only two three female figures in the vintage line, so of course she'd be smaller than all the beefheads around her. This is a low, curving supercar in a line of lumbering trucks and over-tuned ragers. And apparently Eternia is a left-hand drive world, because if you look through the windows to the golden seats inside, you'll be able to see which side the steering wheel is on. That's more detail than expected.

The Teela car looks classy as hell. The body is a slightly pearly white,

with a vac-metallized golden strip all the way around, and a reddish-brown roof that's a reference to the figure's snake headdress - complete with little eye-bumps over the windows! You might expect the roof to be removable, like Raven's cloak, but no. The tires are the same color as the roof, with golden rims. Like we said, ultra classy look!

There are five characters in this series, and they ship in cases of eight - but for once, the girl isn't the shortpacked one! Well, she is, but she's not alone: each case has three He-Men, two Skeletors, then one each of Man-At-Arms, Beast-Man, and Teela. Because if there's one thing Mattel truly accels at, it's terrible casepacks that ruin any chance of their lines having a future that involves anything other than severe pegwarming.