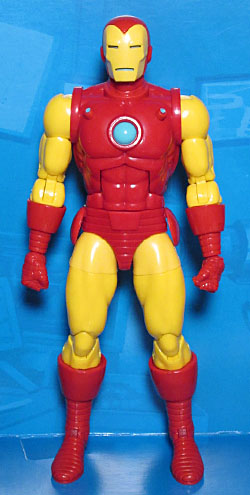 (Someday we'll get tired of that joke. But not today.)

After a tragic battle, Tony Stark lives on in digital form as a hologram at the helm of a high-powered robotic suit of armor.

This is the 80th Anniversary figure in flatter colors: bright red, bright yellow, rather than metallic red and gold. The eye and mouth slits on the mask are painted a bright blue, rather than black, which is the only external clue of what's going on.

As the bio hints, in Civil War II, Tony got punched into a coma by Captain Marvel - a move that, frankly, more comics should employ. No, not beating Tony into a coma (though that is a good idea): comas. "Death" is such a cheap ploy at this point it's become a joke. If you want to write a character off, you know they'll be back someday, so why try to make it "permanent" at all? Stop killing your heroes, writers, and just put them in a coma instead. It might as well be the same thing, and there are fewer hoops to jump through when it's time to undo.

Anyway, Tony rightfully got punched straight out of his suit, and while he was taking the big brain-snooze, an AI version he'd recorded of himself acted as Iron Man, 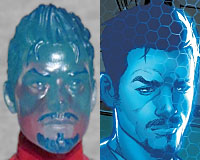 running the armor and doing Tony things. (You'd think he'd have learned that wasn't a great idea from the like three previous times running an AI program through his armor turned disastrously bad, but never mind all that.) When the helmet came off, the armor projected a hologram of Tony's face to make everyone feel more comfortable, so this figure includes a head - surprisingly not the Invincible Iron Man head, but a new mold based on Stefano Caselli's art in Invincible Iron Man Vol. 4 - cast in translucent blue. There's a little bit of darker blue paint for the hair on his face, but that's it. 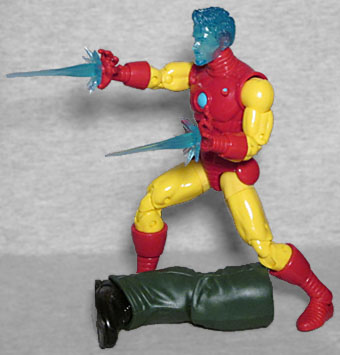 The figure includes the flexed-back hands and repulsor blasts for the palms, but the only thing that's selling this is the inclusion of Mr. Hyde's right leg. If you want to complete the Build-A-Figure, you have to buy this chump.

Civil Warrior was a "where can we find space to dump this repaint" inclusion in the line; AI Tony Stark is a "what can we use to pad things out" inclusion. The comicbooky colors are a decent difference from the existing release of the mold, but this is still a big yawn.