Xavier reveals his master plan... one that will bring mutants out of humankind's shadow and once again into the light.

Yes, but it's not really his idea, is it now? It's Moira's. The entire enterprise is Moira's idea, developed over the course of nine lifetimes. She's spent this life subtly nudging Chuck to be less idealistic and more pragmatic, efforts that finally culminated after his death and resurrection, when he accepted that the best path to peaceful coexistence between human and mutantkind was if all mutants could come together on common ground, united under one flag and for one cause: forming their own parallel society. 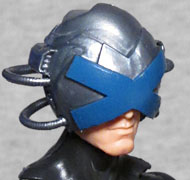 in solid black. That matches how he's seen in House of X, a skinny dude in a dance leotard. He's wearing his portable Cerebro unit, because he's always wearing it: the comic goes out of its way to never show us his face in the modern scenes, leaving the impression that something's up. It does look like The Maker, the evil version of Reed Richards from the Ultimate Universe, which is pretty suspicious. The helmet has a blue X-shaped visor, and wires running around the back like Logan's Weapon X headgear.

The set includes a second head, but it's not for him. Yes, it's still 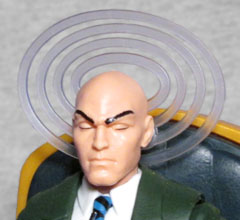 Professor Xavier, but it's not for him. How many times must we say this! HoX/PoX Charles Xavier never takes his Cerebro off, and this head doesn't have one. So what's it for? The alternate head's eyes are closed, and a clear plastic effect is plugged into the back of his head, showing his psychic powers in action; given that the powers are depicted as a series of concentric ovals, it's clear this is intended to go with the pseudo-Animated Professor X. Neat! The alternate "pointing" hands are for this figure, though, because they're the same black.

He also includes the right arm of this series' Tri-Sentinel Build-A-Figure.

Is there really something shady going on with Xavier in the current X-Men books, or is the story simply framing him that way to make us uneasy? Don't know yet, but the toy will be ready for either outcome.