The odds that there's a furniture store in your local mall are pretty low: a mattress store, sure, but furniture? No, those are generally in an abandoned buffet restaurant across the parking lot from the mall. But the Transformers BotBots mall is weird, and thus we get the Home Rangers.

If not for being part of an entire home-goods themed tribe of BotBots, we might have guessed that this one was evidence of the mall being fairly high-end: 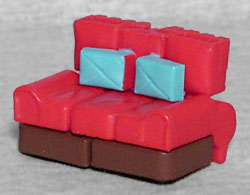 after all, if a normal mall can have benches, a "rich people's mall" could have couches, right? For only being about an inch wide, it is a pretty decent looking representation of a couch: three sections, distinct arms, cushions on the seat and the back, two blue throw pillows... it's a couch. A nice miniature couch.

Converting the couch is mostly guesswork, since Hasbro stopped including instructions (or anything else interesting) in Series 4. Flip the back cushions over, then rotate them forward to be feet. Spread the wooden frame into arms, and tip the central cushion back.

Missing the TV remote? Can't find that 50 cents you swear you had in your pocket? Favorite toy nowhere to be found? Sounds like the work of the cold and calculating Crabby Grabby! She lies in wait, disguised as an ordinary couch. Then, when bots least expect, she strikes!

Devouring anything they let fall between her cushions... nom, nom, nom!

This is a unique robot mode, much more horizontal than vertical. The big claws would make her tip over forward, if not for the tail sticking out behind - clever design, team! The light blue face stands out against the red body, which was really necessary: since it's under one of the cushions, it would otherwise get lost when you're looking at it. 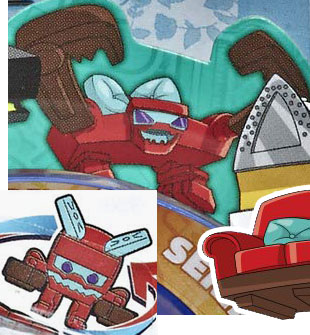 Crabby Grabby is available in a Wilderness Troop 8-pack, or in a Claw Machine Surprise Unboxing set (the one that has Skitter Chatter in a clear ball). Although Hasbro still produces art of the BotBots, the website only has photos now. Crabby Grabby gets to be the little "two modes" illustration on the Home Rangers packages, though.