The Greaser Gang has been part of Transformers BotBots since the start. If you look at the map of the mall from back then, you'll see they hung out at a restaurant on the second floor and a hot dog stand on the ground floor - for whatever reason, you'll find today's 'bot falling off the roof of the cart.

One night in the mid-1940s, Chef Ignacio Anaya was preparing to close up his restaurant (the Victory Club in Piedras Negras) when a group of US military wives came in. Proving that Karens are not a new invention, they asked him to make them something out of leftovers, since the kitchen was already closed. 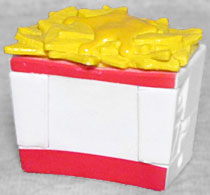 All he had on hand were torilla chips, shredded Colby, and some chiles, so he threw them all together and called them Especiale de Nacho - "Nacho's Special," after the familiar diminutive of Ignacio. Are nachos even sold in a box? At least, a deep one like this? I know if you order nachos at Taco Bell or whatever, you get them in a very shallow cardboard container, so the toppings can reach all of them. Not just the ones on top. And if you get them at the movie theater, you get a plastic shell with a cup of cheese sauce on the side, for dipping. These have a glop of nacho cheese on the top, then nothing else. The chips are sculpted well, and the cheese is a different shade of yellow than they are.

BotBots are not hard to convert. Hold down the feet, bring the arms out to the sides and turn them down, and lower the flap over the face.

Shredder Jack always hangs a perfect 10 on the cheese wave. There's nothing more epic than catching a wave of gnarly gouda or far-out feta. Chowabunga, dudes! 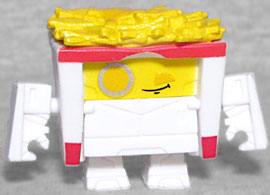 They... they know that "shredding" is skateboarding, right? Not surfing? This is a very wide robot, because they were already more horizontal than vertical even before you get the arms out on the side. There's a stripe on the chest flap that seems like it should be painted red, but it gets nothing. Their right eye is large and circular, with a silver ring sculpted around it, while their left is a tiny little squint pushed up by the small black smile. The face is the color of the chips, while the eyes are the color of the cheese. In the art, the cheese is arrange on the chips like frosted tips on someone's hair, and the body is more pronounced, with its own cheesy paint apps (much more visible in the full-body shots than the stock art). 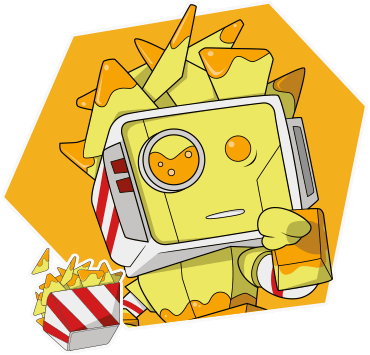 Shredder Jack is a very plentiful BotBot, available in a Sugar Shocks 5-pack, a Toilet Troop 5-pack, a Greaser Gang 8-pack, and a couple of the Arcade Renegades Surprise sets.