Retsuko is a cute red panda, working as an office associate in the accounting department 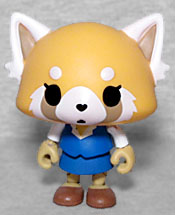 of a highly respected trading company. It's always been a dream of hers to work in this field. But in reality, her bosses are unsymapthetic and give her harsh deadlines. When she gets pushed to the limit, she goes out after work and takes out her anger and stress on heavy metal karaoke sessions!

Sanrio is mostly known for soft, wholesome properties like Hello Kitty, so finding out they also made the adult-oriented Aggressive Retsuko is quite the surprise! It's a show about an office worker who's filled with rage: what kid would care about that? 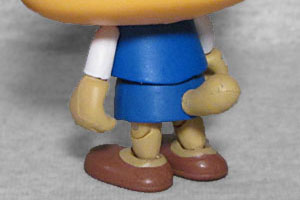 Retsuko is wearing her work uniform: brown shoes, a blue skirt, blue vest, and white shirt. Her tail is molded as part of the skirt, which does mean that with a little twist you could turn this into a wildly inappropriate toy. Her hands and legs are a darker shade than her face and chest, but that's accurate to the art, even if it does look odd here. 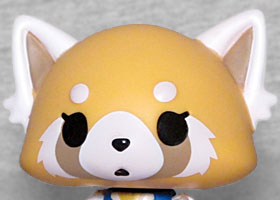 The reason Hello Kitty doesn't have a mouth is so anyone who looks at her can project any emotion they want onto her. Retsuko doesn't get that same benefit, so we can say she looks... worried? Her large eyes are fully open, and her mouth is small are barely open - a "I have how much work to do by when?" look. Her little eyebrow spots are sculpted on, but the stripes on her cheeks are just paint. 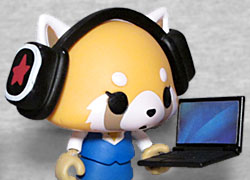 The figure comes with two accessories: her laptop, which opens and features a sculpted keyboard and a sticker to represent the screen; and a pair of headphones that have a notch cut in them so they can fit over her ears.

Like the bio up above said, Retsuko lets out her stress and rage by scream-singing karaoke. It's her chance to let the gentle, polite facade drop and deal with her real emotions 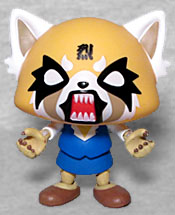 without having someone judge her for it - you know, the thing all women need. Not all women go all "Nathan Explosion" on the problem, but hey, whatever works for her, right?

These figures are made by The Loyal Subjects, which you know means two things: lots of variants, and reported casepack ratios that are mathematically impossible to achieve. They'd have to be insane for one of the variants to not be Aggretsuko's rage-monster form, so naturally, here she is! And allegedly both of these are available in a 2:24 ratio, or as a sane person might know it, 1:12.

Aggretsuko's body is the same mold as above, with the same detailing almost everywhere - when she's singing, she suddenly develops claws, so the hands on this version have extra little nails sculpted on all the fingers. 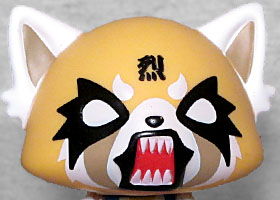 The big change is her head, though: her eyes go blank, surrounded by Gene Simmons-like black markings; her mouth gets black lipstick too, and her teeth are suddenly massive fangs in front of a fiery red void. She angry! The kanji 烈 (retsu) also appears on her forehead. It's both a pun on her name - Retsu-ko - but also on her species: in Japanese, the red panda is known as the ressapanda (literally "lesser panda"), with ressa being written nearly the same way as retsu in katakana: レッ vs. レツ. 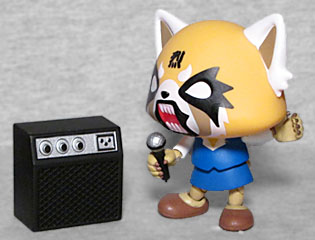 Aggretsuko comes with a karaoke mic and an amplifier. Both versions move at the head, shoulders, wrists, waist, hips, knees, and ankles. The legs might want to pop off their balljoints, but they go back on easily.

Aggretsuko began life as a long-running series of one-minute vignettes on Japanese television - basically just Retsuko getting mad at something and flipping out. Eventually it was turned into a full story on Netflix, introducing her to a whole new audience, and fleshing out her backstory. And the Loyal Subjects line is surprisingly wide, giving us not only the darling little rage child herself, but several of her friends and coworkers, as well.