Most of the Los Deliciosos tribe of Transformers BotBots are Latin-American foods - we'd say "Mexican food," because that always seems to be the catch-all name for the style (you never hear someone say "hey, let's go hit that new Bolivian restaurant"), but we already know not all of it comes from Mexico. Anyway, wherever they come from, they've all been prepared foods, while today's breaks with tradition.

This is an ear of corn. Yes, corn is a staple of Mesoamerican cooking, but it's usually been processed at least somewhat - not just a giant ear of it on your plate. Corn (or "maize," technically) is a human invention: a few thousand years ago in Central America, 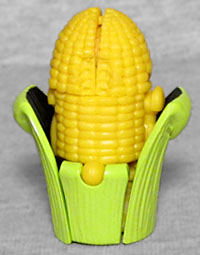 there were two varieties of grass that the native population would gather the grains from; they discovered that the two would both grow better if planted next to each other, and then eventually, the plants cross-pollinated, creating the ancestor of corn we enjoy today. It took centuries of genetic modification (aka "selective breeding") to make it as large and as easily edible as it is today - in fact, when Europeans took corn back from the Americas with them, they didn't also take the proper preparation methods, so they suffered from a debilitating nutritional deficiency, pellagra, that led to the four D's: dermatitis, diarrhea, dementia, and death. This corn is sculpted with its husk pulled halfway down - having a husk like that is another trait we naturally selected for, because it helps protect the delicious seeds from things (other than us) that want to eat them, but it also means it's impossible for corn to germinate itself, making the plant entirely dependent on humans for reproduction.

BotBots convert easy: here, you open the husk, fold the middle up, pulls the arms out to the sides, and slide open the "helmet."

After falling into a toxic vat full of radioactive sour cream, Cotija cheese, and chili powder, this simple corn bot mutated into the notorious supervillain, The Cobbler. 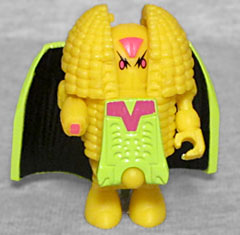 With the sudden ability to blast popcorn out of his new popcorn blaster arm, he had a choice to make: use his powers for good, or for evil. The Cobbler chose a path of darkness. Now, he spends his days pelting other bots with greasy popcorn. MWUH HA HA!

...supervillain ...corn. Sure, that's a thing. Guess they could have named him "Monsanto," but that might have been a little too on-the-nose. The right arm is a blaster, like the bio suggests, and the chest flap has tech detailing. Since the interior of the husk is painted black, it's easy to ignore hanging off the robot's back. The way the corn splits to reveal the face isn't great - it doesn't really open wide enough to see the full head. 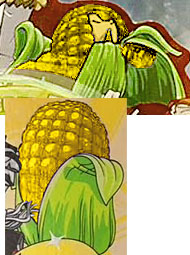 The Cobbler is only available in one of the Claw Machine Surprise Unboxing sets. Fortunately, he's in a clear capsule, so you'll be able to tell you've got the right one.