Taking the "mystery" out of Mystery Minis, 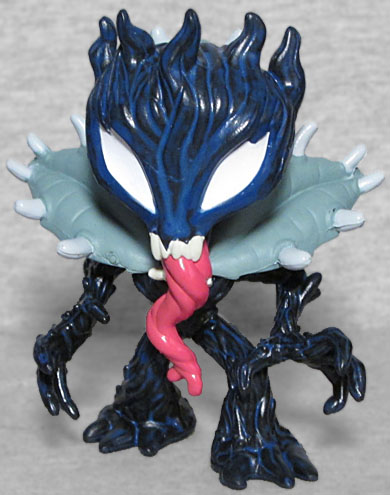 Funko has begun offering non-blind boxes. Sighted boxes? Whatever. They're numbered, they have the figure's name on them, there's a window that lets you see what's inside... it's almost like a real product!

When Flash Thompson joined the Guardians of the Galaxy, he was separated from the Venom symbiote, and the first person being it glommed onto was Groot. He gained a long lower jaw and a forked Venom tongue, but the biggest difference was the three large petals growing around his neck, with "Venus fly trap"-like spines serving as teeth. It's a totally boss design, and since there's no white Venom spider logo on the body anywhere, could work as a plain monster in nearly any context. 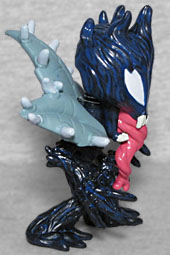 Vroot is sculpted with a great barky texture, as he should be, and is walking forward. His knees are bent so he can actually fit in the box, because two-part figures wouldn't look right if you could see the assembly that would be required. There are spikes on his arms and elbows that could be a Groot thing or could be a Venom thing; it's hard to tell. Funko's Marvel license mandates that they can only do bobbleheads (or "cabezas oscilantes," in Spanish), so this figure has a big spring connecting his head to his neck.

We can't say whether these non-secretive Mystery Minis are available everywhere - this series turned up at Five Below, so it's possible they were a test run that's being clearanced out, or something made specifically for discount stores. Still, it's very nice being able to just pick the ones you want rather than having to gamble. There are 10 figures in the assortment: Spider-Man, Miles Morales, Iron Man, Hulk, Captain America, Black Panther, Deadpool, Captain Marvel, Groot, and Thanos. The normal blind-boxed line also had Loki and Wolverine, plus some store exclusives like Punisher and Rocket Raccoon.

This entry was posted in blog exclusive review, Funko, Marvel and tagged Guardians of the Galaxy, Mystery Minis, Spider-Man. Bookmark the permalink.