2021 has been a banner year for spoilers on toys. The unpredictability of production times and release schedules means companies that would normally only announce (or even ship) their toys after the media in question had already been available simply can't wait for everything all the time. Toys take up warehouse space, and if you don't move them out, nothing new can come in, and your entire revenue stream dries up and then you're boned. So if Mattel has to put a MotU Revelation figure on shelves months before the show? It's not really their fault. But also? Maybe don't plan for your first release to be something from the last minutes of the finale episode. 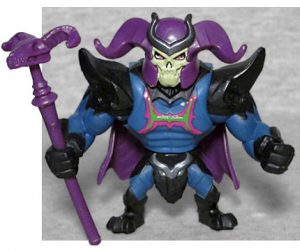 Skelegod, the cosmic lord of destruction, is what happens when Skeletor gets his hands on He-Man's Power Sword - suggesting that what it took for them to be be "evenly" matched foes all these years was for He-Man to be operating at a 10, while Skeletor was down around a 2 or 3. So Prince Adam is to He-Man as Skeletor is to Skelegod, power-levels-wise.

Also physical-size-wise. Just as scrawny little Adam gains about 200 pounds of pure muscle when he powers up, Skelegod is bigger than the erstwhile Keldor. In the cartoon. This Mini is the same size as all the other ones. He retains his blue-and-purple colorscheme, and the yellow bone face, but wears much fancier armor than ever before: a horned helmet, spiky black shoulder pads, a fancy belt in addition to a furry loincloth, and ornate shinguards on the boots. 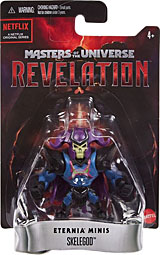 There's not as much paint as on the real figure, but whould you expect there to be? There's a big wicked H on his chest, his version of the symbol that replaced He-Man's old "iron cross" emblem. He's armed with his chaos staff, when he should really have the Power Sword. Maybe that's a Season 2 spoiler.

The Revelation Minis are sold on tiny blister cards, like Series 3 and 4 of the regular line - that may have something to do with the number of opened Castle Grayskull and Snake Mountain shells we saw laying by the display boxes when Walmart carried them. Instead of the retro-inspired red cards, these are much darker. You can barely even tell that's supposed to be Castle Grayskull's jawbridge behind the figure.