In BotBots Series 3, the Music Mob only had one store to call their own. But if you look at the diagram of the mall, this 'bot is upstairs 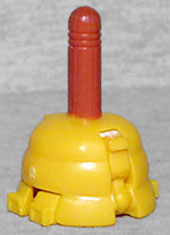 in the construction zone.

Part of the fun of BotBots is playing "guess the repaint" - not for things like "will this drink be repainted as a different kind of drink," but more "will this deodorant be turned into a tombstone?" Along those lines, no one was expecting the plunger from Series 1 to become a handbell for Series 3. It's a clever re-use; the shapes are simplified enough that the mold can stand in for two objects that are only so vaguely similar in form. The cup part is a bright yellow, while the handle is a darker brown than on the first use of the mold.

BotBots are simple, so converting them is easy. Pull out the arms, turn them over, fold down the legs, and pull the entire body down out of the cap. 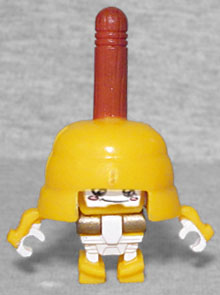 Dingledeedoo is too good to be true. She's an angel and a shining example of how to do things the right way. At least, she acts that way. She's a goody-two-shoes who rings her bell when bots break the rules. So everybot better be on their best behavior!

So she's a Karen? Great. Guess that big smile painted on her face is supposed to be a sarcastic, insulting one? Even without Autobots and Decepticons, some BotBots just have to be the villains. The body being formed by folding down two halves from separate directions is an interesting way of doing things, but the giant size of the cap makes the face hard to see. 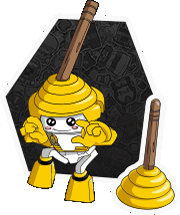 Dingledeedoo is only available in the blind-packs, where she's #6. Which means that, yes, I went against my own rule to specifically get this one, she's not something I only got as a byproduct of a larger pack.