Just as we reviewed the new Gunslinger Spawn, the character got his own comic series. How's that for timing! Here are the two main covers, by Brett Booth and Todd McFarlane: 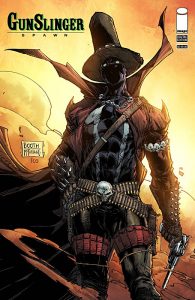 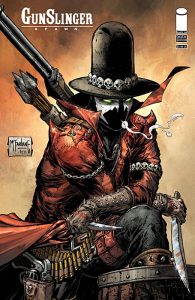 There are others, of course, featuring the art of Greg Capullo, Robert Kirkman, and more. The story is written by Todd himself, so it's... well, you probably have an idea of what to expect. The issue seems to start not only in the middle of a scene or even the middle of a conversation, but in the middle of a sentence! It does explain Gunslinger's tall hat, though, if that matters to you.

This entry was posted in addendums, comics, McFarlane and tagged Spawn. Bookmark the permalink.