The Transformers BotBots were originally divided into eight teams, based on what store in the mall they hail from. For instance, in the first wing of the mall, there were two bathroom supply stores, both bringing us the members of the Toilet Troop; today's bot is just laying on the ground on Level 1. 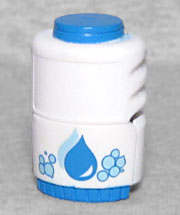 This is a bottle of shampoo - not exactly the most visually distinct object ever, it must be said. That's probably why the mold was also reused as conditioner in Series 2, chocolate sauce in Series 3, and suntan lotion in Series 5. Those are four things you definitely don't want to get mixed up! The sides of the oval bottle have indentations near the top, probably to provide better grip when your hands are wet. And I just dropped it right after I wrote that. Smooth. The bottle is white with blue on the base and lid, and a logo of droplets and bubbles on the front.

To convert this simple little bot, pull the arms out to the sides, flip down the feet, pull the little wings out of the back, and turn the head around. 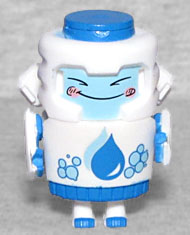 Poo Sham spends all his time looking in the mirror, fixing his hair (even though it's always perfect), and trying to give other bots makeovers. He also thinks it's funny to give his friends bubble mohawks.

Okay, right up front: "Poo Sham" is a terrible name. And not only because it sounds like it should belong to the toilet paper (though that is part of it). Not really sure what else you'd call the shampoo, but there had to be something. His tiny feet mean he's hard to stand. The big happy smile and rosy cheeks make him look pretty cute though. 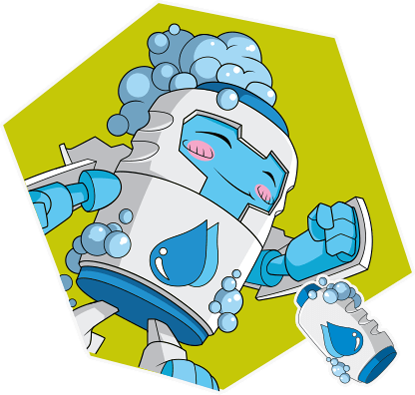 Poo Sham is available in a Toilet Troop 5-pack, two Greaser Gang 5-packs, or in a Jock Squad 8-pack.