Spider-Man relies on his Black and Gold suit and abilities to defend against threats.

The design does look pretty cool, even if we don't know what the payoff is going to be. We got a first attempt at a black costume with Far From Home's Night Monkey, but that was something any SHIELD spy would have been able to wear, while the gold-lined webbing on this one make it clear this is only Spider-Man and no one else. 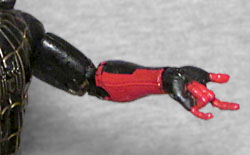 The red on his fingers and the inside of his forearms probably serves some purpose, even if that's only "to break up all the dark with a little flash of color." The Hot Toys version of this suit initially had the red on the gloves like this one does, but an updated version two months later did away with that, so we'll go ahead and say this one is incorrect.

Sam Sparro Spider-Man does not have accessories, just thwip hands. Again, Hot Toys' suggested some spoilery things he could have come with. He does get a part of the Armadillo Build-A-Figure, however: the left leg.

The fact that there's a BAF piece goes in the negative column: it seems almost inevitable that we're going to see this figure again in a two-pack or store exclusive with corrected forearms and the accessories that Hasbro or Sony has deemed too secretive to release yet. So now we're going to have to double-dip.