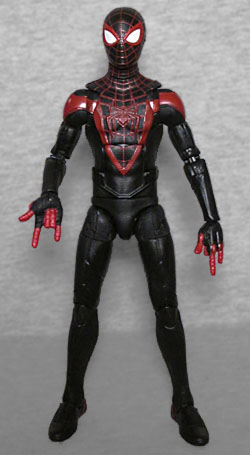 When a fierce power struggle threatens to destroy his new home, Miles Morales realizes that with great power there must always come great responsibility.

Hey look, PS4 Spider-Man finally has a little friend! Other than the Velocity Suit, of course. This is a "Gamerverse" figure, based on the Miles Morales game. And yet it's as tall as the fully adult Spider-Men are! Remember the first Miles figure, that was short but swolen like Future Milhouse? This is its conceptual opposite, tall and thin. It's his usual costume, but with the details sculpted because the videogame figures get to look better than the comicbook ones for some reason.

Miles' normal hands are mid-thwip, and he

gets alternates that are simply open as well as fists. He's also got a swappable head that shows him unmasked. Since Miles' in-game model is based quite heavily on his voice actor, Nadji Jeter, you can make out hints of his looks in the final sculpt. The skintone on the toy is darker than in the game - like they decided it based on nighttime scenes rather than daylight. 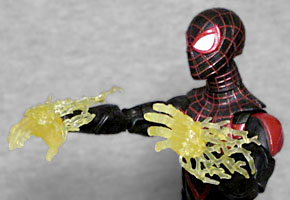 Finally, Miles has another set of alternate hands, these cast in translucent yellow plastic with lightning trailing back off them to show his Venom Strike ability, basically a supercharged static electricity zap. The effects on the hands look really cool, and helped make the decision to get this figure easier. It's a nice bit of contrast.

Of course, so did the inclusion of Build-A-Figure Armadillo's right leg.

Miles Morales is a fine figure, sure, but he doesn't bring any "flash" to this No Way Home series. His inclusion just smacks of Hasbro looking around for things they could include without doing any of the movie's villains.