What If... The Watcher Broke His Oath? 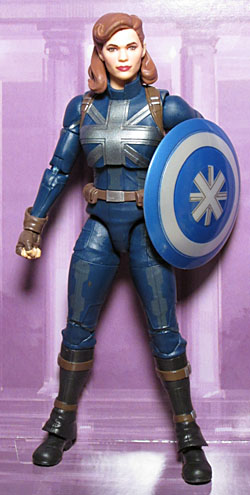 It's interesting how, even in the alternate universes, history tends to play out in similar ways. Brave soldier gets super powers, gets lost in time, emerges in the present, and gets involved with the premiere spy agency. And even further, the soldier infiltrates a captured freighter to fight Batroc.

This Target-exclusive figure uses all the same molds as the normal Captain Carter, just given less flashy paint. The blue remains, but the red of her flag symbol is gone, replaced with all silvers - in other words, Cap's Stealth Suit! Her shield is similarly blue-shifted, and she doesn't include any other accessories or part for the Watcher Build-A-Figure.

I had no idea this figure was coming - it was just a Giftsmas surprise, because Santa knows when you've been good and rewards you accordingly.

1 Response to "What If...?" Captain Carter (Stealth Suit) exclusive review