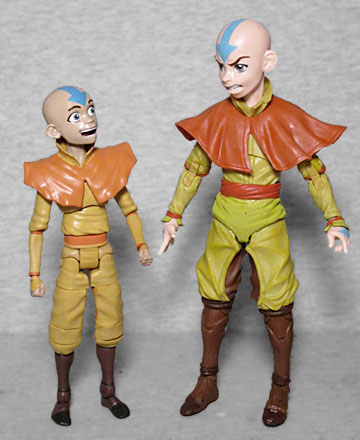 This adventurous 12-year-old is the last Airbender and only 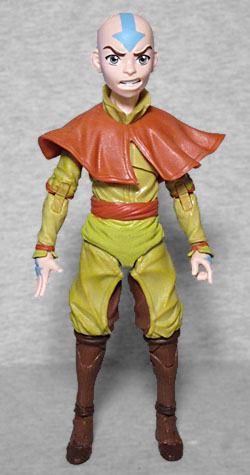 known survivor of the Air Nomads, the arrow on his head a constant reminder of his lineage. His destiny is to learn the art of the Avatar and defeat the Fire Lord of the Fire Nation. But rather than save the world, Aang searches for adventure.

Today we reviewed Zuko, and in the process of writing, it became clear to me I didn't care enough about Aang to give him a full review. So blog addendum it is! If you want a real one, Monkey Boy's got the figure, too; maybe if you're good he'll grace us with his take.

Aang is, fortunately, not 7" tall. As discussed in the Zuko review, Todd utterly #&^@ed up the size of the figures, claiming they're in a seven-inch scale when they're really in eight. In an actual 7" scale, a toy of the 4'6" Aang would be 5¼" tall - you know, the size DST made him? Because they're a competant toy company? McToys' is about 6⅛", so he is accurately shorter than Zuko, but again math reveals that makes this a 1:9 scale figure, so it doesn't fit in with a goddamn thing.

While DST gave their "Season 1" Aang a goofy face because they'd already done a plain one on the first release, Todd gave his a goofy face because... reasons? Nothing says "peaceful, fun-loving child raised by monks" like an expression that suggests he's about to pick up a brick off the sidewalk and beat you with it. Yes, look, everyone: it's your beloved Aang, with his famous look of snarling anger!

McToys kind of gets the colors better. His skin isn't weirdly blue, like all the DST figures', and his orange isn't faded out. Plus, his leggings have more red to their brown, so that's three areas where this toy is better than the other one. But then there's the yellow part of his outfit, which is so dark it's nearly green. Why is this part of the outfit so hard for everyone to get right? It's yellow. It's just bright yellow. It's not yellowish orange, it's not dark yellow, it's vibrant yellow. 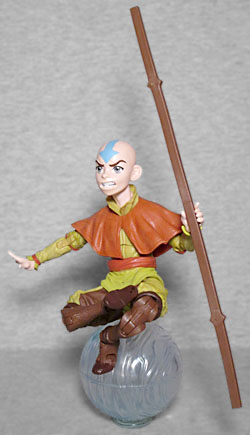 Like Zuko, Aang has a lot of detail in the sculpt, including textures on his clothes. But lots of detail isn't the same thing as accurate detail, so Diamond Select still gets the edge there. To McFarlane's credit, however, Aang's cape/shawl thing does look more natural here, with the edges flared out without having to stick straight out to the sides.

Of course, that may be because McFarlane's version doesn't have to ride his glider, so his arms don't have to raise as far. All he comes with is his staff, and a ball of wind that there's no good way for him to ride. It's got a single footpeg on the side, but he rides his air scooter by crouching on top of it, not on the side. A nice idea, but so-so execution.

McFarlane Toys' quote/unquote "seven inch scale" Aang is a fine figure, as long as all you want is an Aang. If you don't care about other characters, if you don't care about displaying him next to other lines, if you just want to have an Aang in your collection and don't care about anything else, he'll work for you. But even with its flaws, most collectors will be better off getting the Diamond Select Toys Aang.