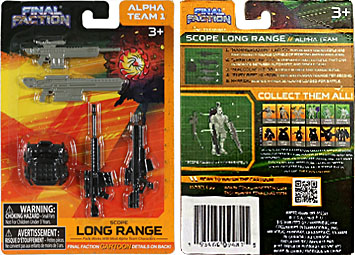 In the first series of Final Faction toys, both good and evil sides of the conflict got three accessory packs: one for a specific character, and two that were just for anyone. Series 2 still has a half dozen packs evenly divided between the groups, but changes things up by making all of them character specific! For instance, our boy Scope gets the "Long Range" pack. 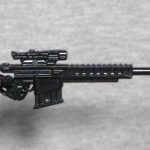 Damn, that's brutal! I mean, GI Joe filecards may talk about how tough someone is or how much of a crack shot they are, or even how much they love the sound of their gun, but the text rarely if ever discusses the bullets entering the enemy's body. There's a real-world "LAR 50" sniper rifle, known as the Grizzly Big Boar, but it definitely does not look like this: for one thing, it's breech loading, while this has a magazine. This is just a nice generic sniper rifle.

"Spartan" XP-109
A versatile battle rifle that can alternate between automatic and single shot. 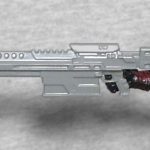 There's a Remington XP-100 pistol, and a Barret XM109 anti-materiel sniper rifle, but there's no such thing as an XP-109. Yet. Remember, Final Faction is set in the year 2050. The back of the card shows this as being black, while the final product is gray. This is definitely a futuristic weapon, very straight and blocky. If not for the weirdly broad magazine underneath, you might almost think it was meant to be a portable rail gun. 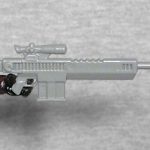 There's no real-world antecedent to compare this to, unless you want to pretend this is an upgrade of the CZ 38 pistol from World War II. This is another gray rifle, not quite as advanced as the Spartan was, but further along than the Hammerdown. Is Scope naming all these things himself? Or are these official in-world identifiers that everyone would know? "Malcolm" isn't exactly a name that screams "intimidation." It's nice that all these guns have scopes on them, but the articulation isn't enough to get them anywhere near his face. 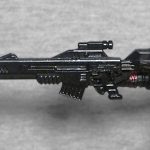 You want to know what a KL-308 really is? It's a locksmith's kit for fishing broken keys out of locks. .308 isn't an uncommon gauge for rifles, of course, and KL could really mean anything (a manufacturer founded in the next three decades?), so the name makes sense; but why would a sniper, the guy whose entire bag is calm precision, need to fire 400 rounds per second? Do plasma rounds not cause any recoil? This definitely looks like some kind of sci-fi future tech, even if it does still have a magazine sticking out the bottom. 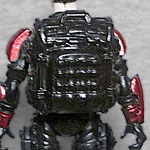 This is a big backpack, way larger than the one originally included with Scope. It's got sculpted packets and such, but the peg is slightly too large to adequately fit the hole in the figure's back. Like, the peg being too long, we could deal with; this is actually too fat to plug in properly. Not really sure what the H in "H-Pack" is supposed to stand for - it's not shaped like an H or anything - but the bag is hollow, with a big slot where one of the guns can be stowed. Even Stormwatch, the one that originally came with the figure!

While these are obviously intended for Scope (the packaging even specifies that), they're designed so they could be used by almost any Alpha Team 1 character. And of course, just being fancy rifles, they'll also make for good accessories for lots of other lines as well. Inflation has caused Dollar Tree to raise its prices a massive 25% - that is, from $1.00 to $1.25 - but that just means each accessory in this pack only costs one quarter, and that's not a bad price to pay for them. But really, there's nothing here that's so cool you just need to buy it. The guns are fine, the backpack would be better if it could actually fit onto the toy... this is good, but not necessary. Get it if you want to up his arsenal, not if you think it's somehow going to make him more "complete."